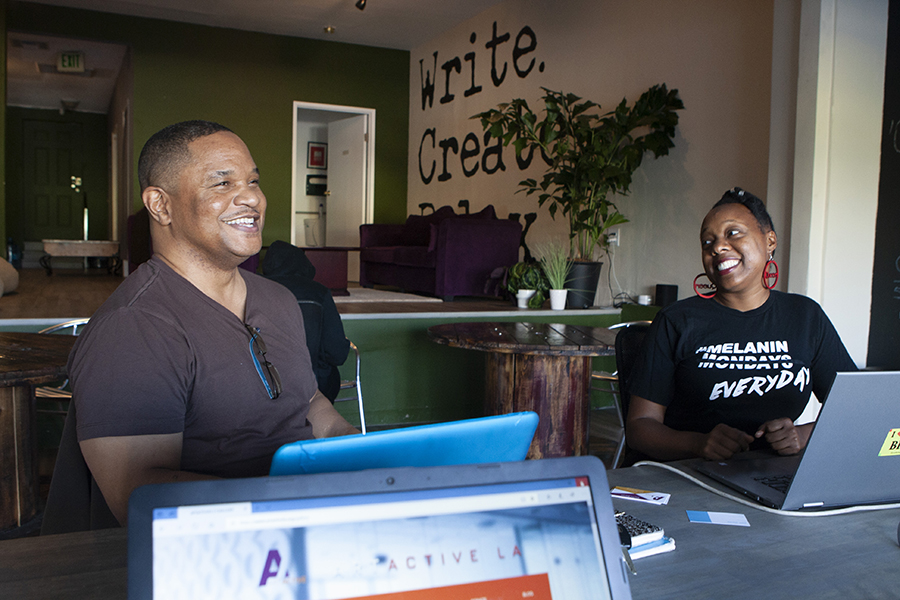 John Jackson interacts with another writer at The Metaphor Club in Leimert Park. Photo by Jason Lewis

When The Metaphor Club, the new creative membership space on Crenshaw Boulevard opened last August, one of the first to sign up was Leimert Park resident John Jackson.  Jackson, who’s owned a home in Leimert Park for the past six years, is a fixture within this community, and is one of the founders of Third Thursdays: Meet & Greet, a monthly meet up of neighbors at various Leimert Park and greater Crenshaw businesses, homes and organizations.

“I was initially told about the club by a neighbor, and it immediately worked for me,” said Jackson, a former classical singer who has worked in the non-profit sector for thirty years. “I felt that I needed to support innovative entities like The Metaphor Club, along with my selfish need for a workspace.  And having it owned by people in the area was a huge plus.”

Jackson, who is a member of Alpha Phi Alpha Fraternity by way of Indiana University, also joked that it didn’t hurt that The Metaphor Club is owned by four Alpha brothers.

But beyond those attractions, Jackson was drawn to The Metaphor Club because it fit what he does in the Leimert Park community, which is to provide consultant services to non-profit organizations—staff recruiting, organizational management, fundraising and board development.  He works primarily with arts organizations and social service organizations in the South Los Angeles area.  That mission meshed with The Metaphor Club’s emphasis on not only being a creative membership space, but also supporting creatives in the community through programs, talks, workshops, and lectures.

One neighborhood program that Jackson, along with his Leimert Park and View Park compadres Kim Anita, Valena Dismukes, Lena Hobson, Gail Molen, Michelle Muton, and Linh Da Tran, have been successful in implementing is Third Thursdays gatherings for nearly four years.  Each month, Jackson and the Third Thursday committee picks a local home, business, or community space to bring their fellow neighbors together.

“In April 2015,” Jackson recalled, “we felt that there was a need for neighbors to really get to know each other in person.  Too often, people would meet on Nextdoor.com (the social media app) and get into arguments without really knowing each other.  And I felt that if we could look each other in the face, then we could really have a better community.”

For January, the Third Thursday was hosted at The Metaphor Club, where approximately 40 folks from Windsor Hills, Baldwin Hills, View Park, Leimert Park, and surrounding areas met for a potluck.  The Metaphor Club partner, and best-selling author, Lawrence Ross gave a brief lecture on his book, “Blackballed: The Black & White Politics of Race on America’s Campuses.”  Having lectured at over 700 colleges and universities, Ross talked about the issue of campus racism, and how it’s not that different than the racism we see in society.

“There’s something cool about neighbors getting a chance to meet each other on a person-to-person level, while also exploring the spaces that their own neighbors are building in the community,” Jackson said.  “Plus, anytime that you can get people to talk, eat, laugh, and be neighborly, it’s a plus.”

The Metaphor Club is located at 4333 Crenshaw Blvd. Email: This email address is being protected from spambots. You need JavaScript enabled to view it.