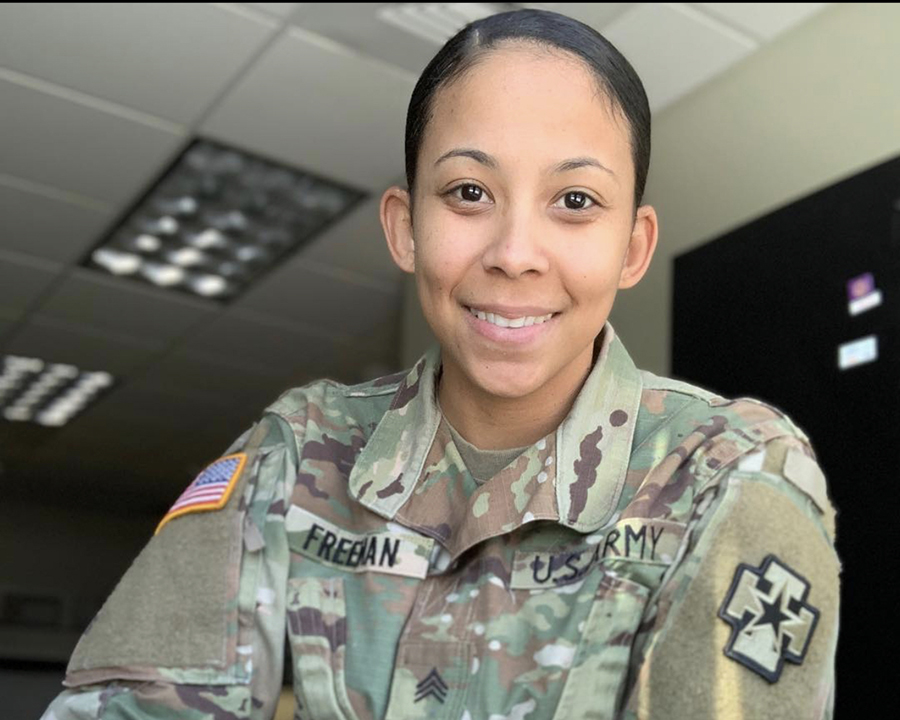 Freeman, an Inglewood native, will complete her Bachelor of Science dgree in Nutrition in 2021 and she will pursue a Master of Science degree in Dietetics.

While Freeman is having a successful Army career, this is not the path that she thought that she’d be taking.

Freeman’s decision to join the Army was to give her first son a better life.  She moved from Inglewood to a neighborhood on the east side of San Bernardino called “Little Africa.”  To her surprise, that area had similar issues to the area that she moved from.  She also had financial issues, which left her without options, so she decided to join the military.

“I initially tried the Air Force but there was a long waiting list,” she said.  “So I tried the Army, got accepted, and then sent to bootcamp soon after.”

Freeman completed Basic Combat Training at Fort Jackson, South Carolina, and her Advanced Individual Training at Fort Gordon, Georgia.  There she was awarded the MOS 25Q Multichannel Transmission Systems Operator-Maintainer.  Upon joining the Reserves in 2012, she reclassed her MOS to 92F Petroleum Supply Specialist at Fort Lee, Virginia.  When accepted onto the AGR program in 2017, Freeman again reclassed to 92Y Unit Supply Specialist to meet the needs of the Army.

While Freeman is moving up the ranks, she has dealt with issues that most soldiers do not have to.

“Being a Black female is the biggest obstacle in the military,” she said.  “When I show any type of emotion I’m often branded as an angry Black woman.  When a Caucasian male can literally speak in the same tone and repeat my words fluently it’s called leadership.”

“The end goal is to be a registered Dietitian and provide nutritional advise to low-income families who lack the knowledge and access,” she said.

Freeman’s husband Matthew is also in the Army, and they are raising their blended family of six children.