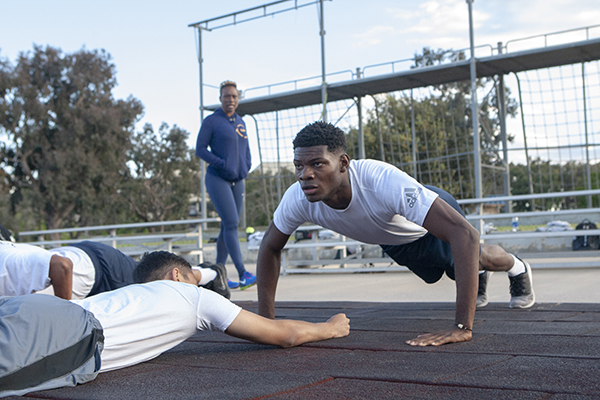 Many candidates take advantage of this free physical fitness program before they make it to the police academy. 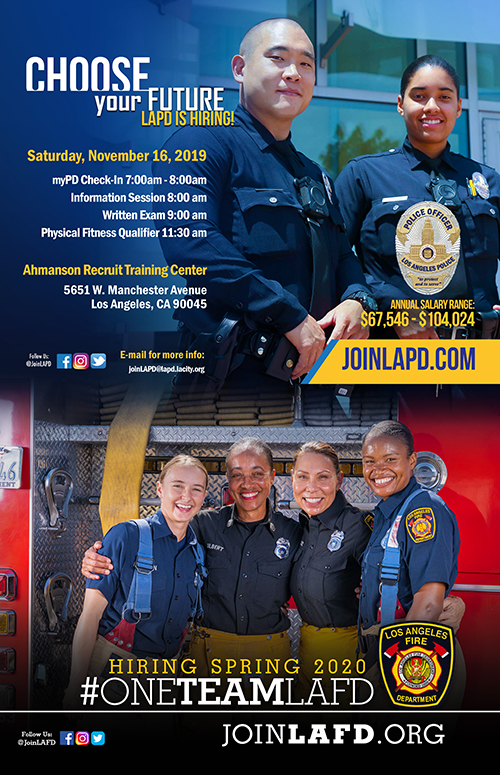 The physical rigors of being a Los Angeles Police Department (LAPD) officer can be difficult for a lot of people.  As Sergeant Cassandra Britt-Nickerson puts it, “When a person is going to run, you’re going to be running after them.”

Sergeant Britt-Nickerson points out that an officer who is chasing a suspect is carrying a lot of weight.

“We carry a lot of equipment around our waist,” she said.  “Upwards to 15 pounds.  We have on those big shoes and wool uniforms.  That’s a lot of gear to be carrying.  You have all of this stuff on you, and now you have to run with them, and catch them.”

While that is a difficult task, the LAPD has a program that physically prepares candidates before they enter the police academy.  After passing the written test, incoming officers can attend the Candidate Advancement Program (CAP), which is a fitness program that greatly improves their strength and stamina.

The CAP program features high intensity interval training (HIIT) mixed with endurance training.  Candidates perform body weight exercises, sprints, and long distant runs.  Being in great physical condition is not a prerequisite to participate in this program, as there are a beginning, intermediate, and advanced groups.  Some people who start the program are not in good shape, but if they stick with the program, they see dramatic improvements.

“I’ve had people that have come in here and they could barely make it on our runs,” Sergeant Britt-Nickerson said.  “After some time they’re running in the advanced group and they’re running seven to eight minute miles.  I’ve seen many turnarounds.  I’ve had people who came in 70 to 80 pounds overweight, and after losing the weight, they went on to become police officers.”

It’s important for the candidates to participate in this program well before they start the police academy, which will not be too forgiving to candidates who are not in good physical shape.  It’s much better to struggle at CAP than in the academy.

“It’s good to fail here,” Sergeant Britt-Nickerson said.  “It’s good to see your weaknesses here because we can work on them.  We can turn those weaknesses into strengths.  I want you to fail forward.  We really want you to be successful.  When we put a candidate in the academy, we want to make sure that they have the physical abilities to be successful.  It’s a lot of time and energy to go through the process just to make it to the police academy, and then it doesn’t work out because you weren’t physically prepared.”

The CAP program also gives the candidate their first experience to what it will be like to be an LAPD officer.

“Not only does this program physically prepare you, it mentally prepares you,” Sergeant Britt-Nickerson said.  “You’re actually on the academy grounds.  You’re using the facilities, and you’re getting in the mindset of being at attention.  If you weren’t in the military, you wouldn’t understand what any of that meant.  And being here, you’re with people who are doing the same thing that you’re trying to accomplish.”

There is a strong push from within the LAPD to attract African Americans to the police force.

“Chief (Michel) Moore is very conscious about what our department is going to look like in the next several years,” Sergeant Britt-Nickerson said.  “Back in 1990 when I came on, there were a lot of African Americans and females.  There was a lot of diversity.  Well we’re all of retirement age.  I go to a retirement party every month.  So what does that look like for us if we don’t fill the ranks that we’re losing?  The chief wants the department to look like the city it serves.”

The CAP program is held on Monday and Wednesday evenings and Saturday mornings at the Ahmanson Recruit Training Center, located at 5651 W. Manchester Avenue, and also on Tuesday and Thursday evenings at the LAPD Academy at Elysian Park, 1880 N. Academy Road (near Dodger Stadium).

For more information about the CAP program, and to find out more about the LAPD’s hiring process, visit www.joinlapd.com and follow them on social media.