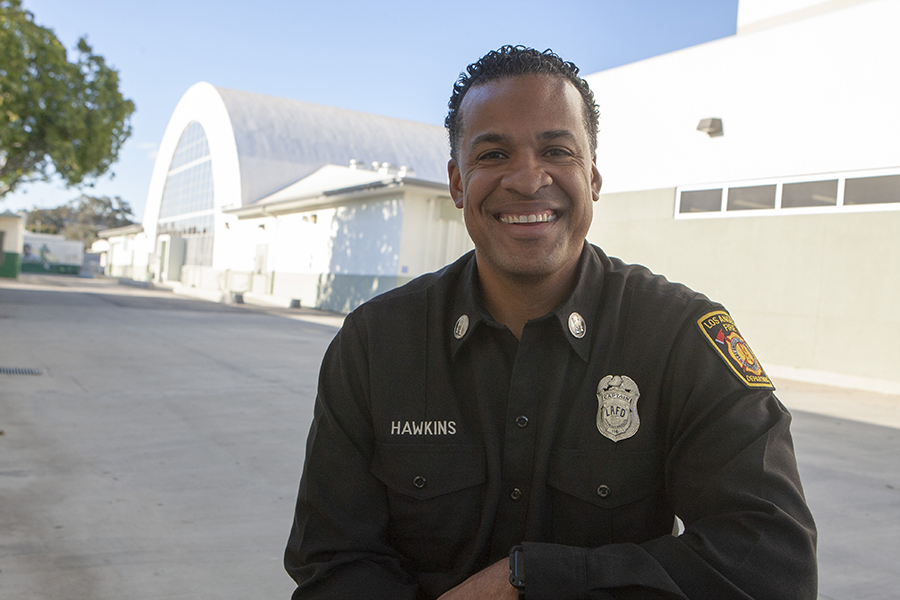 The Inglewood native was mentored by firefighters when he was younger, and now he’s encouraging others to join the service.

Fire Captain Robert Hawkins has been entrenched in South Los Angeles and Inglewood communities his entire life.  The Inglewood native dreamed of being a firefighter as a child, and now he helps locals navigate their way into the Los Angeles Fire Department (LAFD) as a recruiter.  He can be seen at many community events answering questions and promoting the great benefits of the fire department.

Hawkins is very proud of his upbringing in Inglewood, where he attended Morningside High School and played on the football team.  He also was introduced to the fire services during this time.

“My community influenced me by just being involved in my life,” he said.  “I was mentored by a neighborhood fire station, and I really got involved at a young age in the fire service as a fire explorer.  Community is very important to me.”

Hawkins participated in Project Rescue, which is a mentorship program.  He was paired with a fire captain who he would meet with once a week.  He would do homework at the fire station and interact with the firefighters.

“One day they took a regular neighborhood kid on a ride along on the fire engine, and that was the time when I made the decision that this was what I wanted to do,” he said.

Hawkins joined the Explorer Program, where he learned about the tools and equipment that firefighters use.  After graduating from high school he attended El Camino College, where he took classes in their fire academy.  The classes required to become a firefighter may seem intimidating to many people, but Hawkins said that it’s typically not an issue.

“Being a firefighter, you have to be a jack of all trades,” he said.  “You have to know about building construction; the latest and greatest safety features; the medical aspect of the job, which is 90 percent of our job.  You have to know about fire behavior.  You have to know everything.  So there’s a lot of studying and training involved.  But it’s something that a typical person can handle.  For me, it wasn’t tough, so I just had to put in the study time because it was new to me.  But it was definitely doable.  It’s not rocket science and the reward is in learning and accomplishing.  You’re surprised that you just passed that class.”

In 2005, Hawkins became the the face of recruitment for the LAFD.  His image was selected to be on recruitment flyers, billboards, and posters all over the city.  He has always had a passion for recruitment, which led him to become the Fire Captain over LAFD’s Firefighter Recruitment division.  In his position, he interacts with community members who show interest in becoming a firefighter.  Many people that he speaks to do not have experience with careers in the fire department.

“That’s the best candidate, because that was me,” he said.  “I started with no family (in the fire department).  The first thing people need is to become hooked.  They need to see what we do, and see the adventure part of our job.  They need to see the team aspect of our job, and see the benefits of helping people.  Once I’m able to hook them, now I’m able to talk to them about the steps of becoming a firefighter.”

Hawkins also participates in the Future Firefighters program at Dorsey High School.  The program is administered by the Los Angeles Stentorians and Los Angeles County Stentorians, which are Black firefighters associations.

Part of promoting the fire department is telling people about the great benefits of the job.

“There are some really good perks,” Hawkins said.  “It’s simple.  Being a firefighter, you’re probably not going to be a millionaire, but you’ll definitely live comfortably.  When I was 25 years old, I bought my first house.  You won’t have to worry about money, and your family is taken care of.”

Hawkins has had a very rewarding career in the LAFD, and he’s helping others achieve their dreams.  For more information about the fire department, visit www.joinlafd.org.  Also find them on social media.