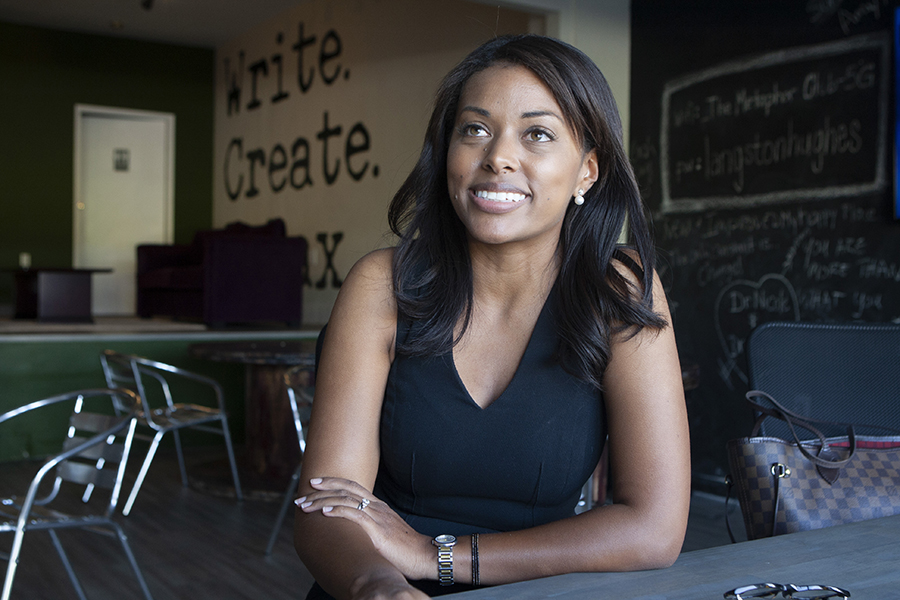 Jamarah Hayner worked for a few high-profile politicians before she started her own consulting firm. Photo by Jason Lewis

Hayner has worked on major development projects, such as Metro’s Crenshaw/LAX line and the Martin Luther King Jr. Community Hospital.

The greater Los Angeles area is going through continual transformations, and over the past several years there have been major projects popping up all over the county.  A tremendous amount of the growth is happening in South Los Angeles and Inglewood, and many residents seek to stay informed about how these projects will affect their lives.  That’s where Jamarah Hayner comes in.

“I mainly work on what I’d call large transformational projects,” she said.  “Most of which are focused in South Los Angeles.”

Hayner is the CEO of JKH Consulting, which is a public affairs firm that is focused on community development, infrastructure, and housing.  Her firm’s outreach and advocacy efforts have played a critical role on projects totaling more than $2.5 billion.  Projects include Metro’s Crenshaw/LAX Transit Project, Martin Luther King Jr. Community Hospital, as well as other major projects in Inglewood and Compton.

“As those communities grow and change, whether it’s a light rail or a new hospital, I’m making sure that our community comes along with that,” she said.  “I get to serve as a bridge, as a storyteller, and an advocate to make sure that we’re all growing alongside each other.”

Projects that bring about major changes in local communities are often met with concerns from the residents, and many people feel like they are left out of the decision making process.  One of Hayner’s many tasks is to bring community members and developers together to work through major issues.

“Any time you’re talking about big changes, you’re going to get a lot of different opinions,” she said.  “A lot of times I find myself facilitating dialogue and just making sure that people are at least hearing each other.  I don’t expect that everyone will agree at the end of the day, but I do feel that every person has the right to be heard; the right to know the facts about new things that are coming into their community or problems that need to be solved.  I want to make sure that the lines of communication are always open.”

Hayner is an advocate for people of color, which can be attributed to her upbringing in the Bay Area.  Her parents were both journalists who worked to diversify newsrooms.

“I grew up in in the minority and progressive journalist community,” she said.  “So I was always very close to civic issues.”

Hayner attended Barnard College, which is an all women’s university in New York City, where she majored in American studies with focus on African American studies.  After graduation, she began her career in the office of New York City Mayor Michael Bloomberg, where she worked as the Community Affairs Unit Chief of Staff and Director of Policy and Initiatives, helping to manage citywide outreach.

Hayner came back to California, and she worked on Kamala Harris’ campaign to become Attorney General.

“That was amazingly exciting to see Kamala Harris as she was running for Attorney General, and the tremendous work that she had done as District Attorney,” Hayner said.  “It was also amazing to see the South L.A. community come together.  There were so many of us, day after day, night after night, around the clock, to make sure that she had a very strong base of support.  That really made a difference in the end.  That race came down to L.A. County.  She was running against the sitting District Attorney at the time, and she was able to pull off this amazing victory.”

After the election, Hayner served as Harris’ Southern California District Director, for whom she managed community outreach on a range of issues including her landmark foreclosure relief legislation package.  Hayner also worked as a special assistant to Supervisor Mark Ridley-Thomas.

“I have learned so much from the Supervisor,” she said.  “Chiefly that we have earned every right to demand the highest standards for our community.  That we never settle.  He has held himself and everybody who has worked with him over the decades to that standard.”

After working in government for 10 years, Hayner decided to start her own consulting firm in 2016.

“I grew from just me in my living room to having a team of 10,” she said.  “I’ve been advocating for small businesses for a number of years.  But to get to live it has been an education, one that I would not trade.  To get to live out your values as an employer is really neat.”

Hayner has been a member of the Greater Los Angeles African American Chamber of Commerce (GLAAACC), and she is currently the organization’s vice chairman of the Board of Directors.

Hayner has made a number of great career decisions to get to where she is at today, and she has some sound advice for people who are looking to be in her career field.

“Working on political campaigns has been very helpful, either in a staff or volunteer capacity,” she said.  “Being involved in your church is extremely helpful.  A church is a big organization with a lot of people.  I’m on the staff parish relations council at my church.”

Hayner has made an exciting career out of bringing community members, elected officials, and developers together on projects that will affect communities for decades.