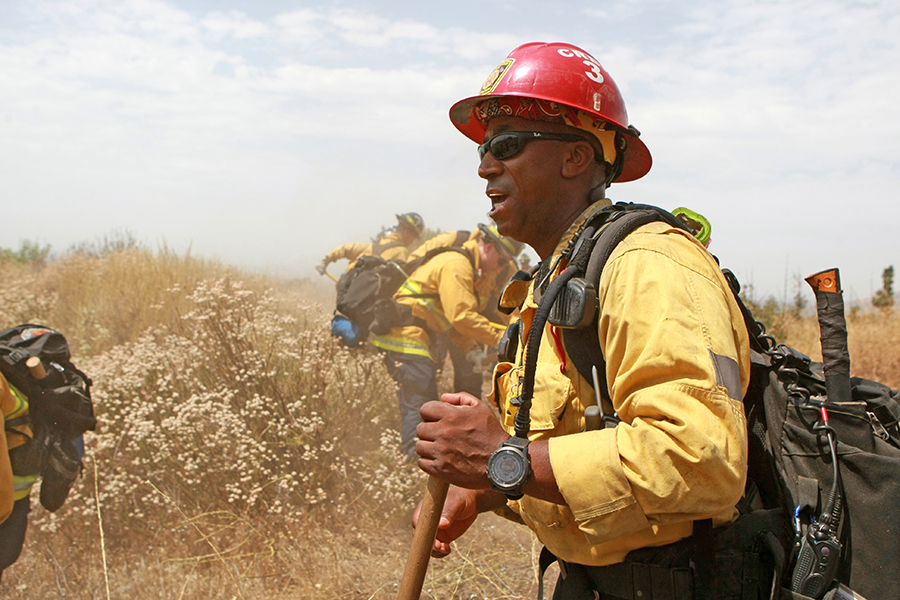 Paul Wingate started his firefighting career with the U.S. Forest Service. He is an expert at containing and extinguishing brush fires. Photos by Jason Lewis

Firefighter Paul Wingate found his calling in the great outdoors, and he has made a career out of extinguishing brush fires.  The South Los Angeles native trains future fire fighters as he combats these devastating wildfires.

Because of California’s dry and windy conditions from late spring through the fall, wildfires have become routine, and this year has been notably bad.  The brush areas in Baldwin Hills, View Park, Windsor Hills, and Ladera Heights put local communities at risk.

“The way things are going lately, with the drought and dry vegetation, fire season is almost year round,” Wingate said.  “Our rain fall over the last five to eight years has been very low.  And because of the wildfires that we’ve been having, that are more aggressive and larger year after year, our grass crop is growing back and dying off fast.  That’s our main carrier of wildfires is the dead grass crop.”

Preventing wildfires can be difficult, so Wingate recommends that people perform hazard reduction around their property to create a defensible space around their homes.  A specialist can be hired to do this, or home owners can use a weedwacker to remove dead grass.

Wingate has worked for the Los Angeles Fire Department (LAFD) for 18 years, but his journey to becoming a firefighter started well before he was hired in 2000.  He grew up in Baldwin Hills and moved to Santa Clarita as a teenager.  There he joined the Los Angeles County Explorer program, which is designed for 15 to 21 year olds who are interested in learning about a career in fire service.  When he was 20 years old, he made up his mind that he wanted to be a firefighter when he went on a ride along.

“I went to a mobile home fire that got into the brush,” he said.  “A green firetruck showed up, and I was asking the guys what’s that.  They said that it’s the U.S. Forest Service.”

Wingate joined the U.S. Forest Service’s apprentice wildland firefighter program in 1993.  He started off on the hotshot crew, which is an elite team that is one of the most highly trained wildfire crews in the country.  He started his career in the Los Padres National Forest’s Monterrey District, and then he worked in Saugus, near Santa Clarita.

As a hotshot, Wingate has fought forest fires in nine different states.

“From California all the way to Alabama,” he said.  “It was a very exciting time in my career.  Being outdoors, hiking, seeing places that I probably wouldn’t have seen on my own personal time.  I remember waking up one morning on a fire, and looking up at the snow capped mountains of Mount Shasta (60 miles south of Oregon).  I fought fires in Yosemite National Park and I’ve worked in the Rocky Mountains.  A lot of it is nature.  I remember going on a hike when I was in Padres National Forest and I came across a golden eagle.  He stood about two feet off the ground with a wingspan of about five or six feet.  It was very impressive.  You’ll never see that in the city.  I was attracted to being outdoors and being in nature.”

After being hired by the LAFD, Wingate was able to work in the community where he grew up.  He worked at Fire Station 94, which is located on Martin Luther King Jr. Boulevard and Coliseum Street.

“During my time at 94, just about everybody on my shift had ties to those communities,” he said.  “We were great mentors to kids at Dorsey High School.  I got to help train and mentor young men and women in the area.  It was very gratifying to work in the community.”

Wingate enjoyed training young men and women who were interested in fire service careers, and he was interested in continuing his career of fighting wildfires, so he became an instructor and foreman of the LAFD Crew 3 Type II Volunteer hand crew, which fights brush fires.

“This gives them an introduction to the fire culture, firehouse, tools and equipment, and teamwork,” he said.

Volunteer members of Crew 3, who are typically 18 to 30 years of age, receive wildland classes and hands-on training to support LAFD operations in the areas of fire prevention (clearing firebreaks, trails and fire roads), assisting with fire suppression at brushfire incidents, and other activities.

Crew 3 members do not directly fight the brush fires along side firefighters, but they assist the overall efforts to contain and extinguish the fires.

“We’re removing all of the fuel along the fire’s edge,” Wingate said.  “As the fire approaches the fire edge, once we remove the fuel, it runs out of steam, and it eventually goes out.”

Fighting wildfires has expanded the horizons of many firefighters.

“I had a guy on my crew, a young African American male, and he had never been away from the city,” Wingate said.  “I got him a job in Oregon a year ago and he loved it.  He said that Oregon is one of the most beautiful places that he’s ever been.  Sometimes you have to get out of your comfort zone and develop yourself.  Insert yourself into different situations and learn from them.”

Crew 3 typically trains in Sylmar, but the volunteers come from many different communities in Southern California.  Wingate says that he currently has members of the crew coming from as far as Long Beach and Tustin, so commuting from South Los Angeles is not an issue.

To find out about Crew 3’s orientation sessions, visit their Facebook (LAFD Crew 3) and Instagram (@losangelesfiredepartment_crew3) pages and join their email list.  For more information about joining the LAFD, visit www.joinlafd.org.