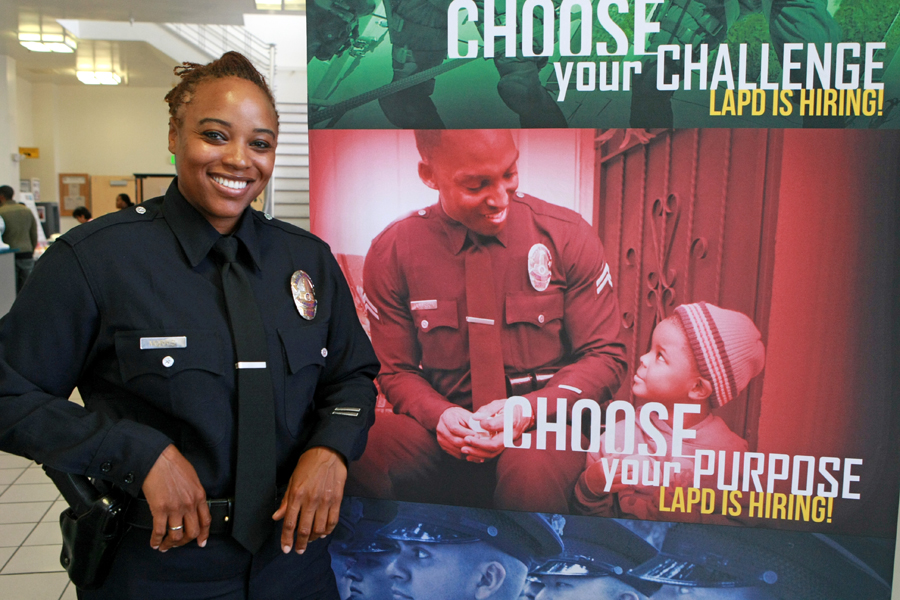 Officer Brit Morris is a recruiter with the LAPD. Photos by Jason Lewis

The Los Angeles Police Department has become more inclusive of women and people of color within its ranks, which can benefit African American communities.

As many people continue to have difficulties obtaining employment in today’s job market, one career path that many people, including African Americans, may be over-looking is a career in law enforcement.

The Los Angeles Police Department (LAPD) offers over 250 jobs, and they are consistently hiring.  But many black people may be avoiding employment opportunities because of the strained relationship between communities of color and the LAPD.

That was true for Officer Brit Morris.  Both of her parents are retired LAPD officers.  Her mother, Tia Morris, grew up in Ladera Heights, and her father P.J. Morris in Baldwin Hills.  Her father retired as a Detective III Coordinator for homicide in the northeast division (Atwater Village), and her mother was a patrol captain in Van Nuys.

Morris can remember the issues that her parents dealt with at a time when the LAPD was dealing with race and gender issues within the department.

“I’m hearing all of these stories, and I was like, ‘Who would want to do that?’” she said.

Morris’ plan after graduating from San Jose State University with a degree in journalism and public relations in 2007 was to work in private industry as an advertising executive.

“I thought that I was going to rule the world because I had that little piece of paper that said that I graduated from college,” she said.  “And 65 interviews later, I found out that I was either under- or over-qualified.  I was thinking, ‘How do I get qualified if nobody is giving me an opportunity?’”

At that time she kept seeing billboards advertising that the LAPD was hiring.

The difficulties in finding a job, even with a college degree, led Morris to re-evaluate her position of working for the LAPD.  She saw that her parents lived a financially comfortable lifestyle.  If they could do it, even with the issues within the department, so could she.

“I’d say that we had a good living,” she said.  “This career allowed my family to afford a lifestyle that’s comfortable.  We’re not millionaires, but we do have a quality of life that is sustainable.  It’s not excessive, but we’re not scraping the bottom of the barrel every month.”

When Morris applied for employment with the LAPD, she was surprised to find out that working for the department is not all about chasing around suspects, and that the job had a starting pay that was much higher than the jobs she was applying too.

“I didn’t realize how many jobs LAPD had when I applied,” she said.  “I saw that they were paying just under $60,000 a year.  That’s four times what all of the other jobs that I had applied to were paying.  They were paying as soon as you started the academy, so all I had to do was get in and I would start getting paid.  I was like, ‘Cool, let me go sign up for this paycheck.’  That’s what it was originally, when I was 21.”

Morris has been on the job for 10 years.  After spending six years working basic patrol, gang unit, and traffic collision investigation, she spent four years as an instructor at the academy.  She was a Department Subject Matter expert in human relations, and she taught new recruits how to handle domestic violence, sexual assault crimes, and deal with cultural diversity.  She is now a recruiter.  Before this position, she had never done promotions.

Many people with civilian careers cannot easily change jobs, or go down a new career path.  But at the LAPD, there are a number of directions a person can take.

“This is a career, it’s not really a job,” Morris said.  “There are a lot of different jobs within this career, and I will never have to give up my pension or tenured track by doing these different jobs.  You can’t do that in private industry.  You can’t be an advertising executive one day and tomorrow go over to another company and be a publicist.  You’re starting over.  Here, I don’t have to start over when I start a new job.”

While this career is more than fighting crime, every officer starts off in patrol.

“Patrol is the backbone of the the LAPD,” Morris said.  “When you come out of the academy, you shoot straight to a black and white (patrol car).  You are answering calls for people’s worst day ever.  Nobody calls 9-1-1 to say that ‘I graduated from college, or I’m having a baby, or he proposed.’  Nobody does that.  They call when somebody is getting killed, or their house is being broken into, or they are being violated in some way.  That is what the public sees.  One of our main missions is to safeguard lives and property.  That directly speaks to patrol.”

After officers pay their dues, they can choose their path within the department.

The strained relationship between police forces around the U.S. and black communities may lead many African Americans away from law enforcement jobs, but that may be one reason why black people need to pursue those jobs.

“The problem is when you have (non-black) officers who do not understand what it’s like to be black in those communities,” Morris said.  “Who come and ‘wreck shop’ so to speak, and then go home 50 miles away to a community that does not look like this one.  The difference is that I still go home to a community that looks like me.  They don’t.  They work in a community that doesn’t look like them, and sometimes they don’t understand.  For some reason I think a lot of times the idea is that black people know and understand, and can be compassionate about how other people live that are not black.  But sometimes the sentiment doesn’t always come back.  That’s where I believe that I can be a conduit for education here.”

“There has been a lot of change,” Morris said.  “The department and the city are more inclusive.  The department needed to adjust to having more women on the job, and to have more people of color.”

“Sometimes it takes an officer to say (to another officer), ‘Hold on partner; let’s just see what’s going on,’ or, ‘That’s not what’s going on here,’” Morris said.  “Or (to say to a civilian), ‘Ma’am or sir, I’m gonna need you to behave, because that’s not conducive to anybody’s welfare right now.’”

The LAPD offers medical and dental benefits for employees and dependents, and free gym memberships.  After one year of service, an officer receives one month of paid vacation time. After 10 years, it is one and a half months.  The typical schedule has officers working only 140 days a year.

The minimum requirement to join the LAPD is being 20 years old at the time of the test, either graduated from a U.S. high school or have obtained a GED, have a clean background, and be a U.S. citizen.

Morris gives a monthly training seminar, where she goes over the seven-step application process.  People who are interested in joining the LAPD can take the initial exam right after the seminar.