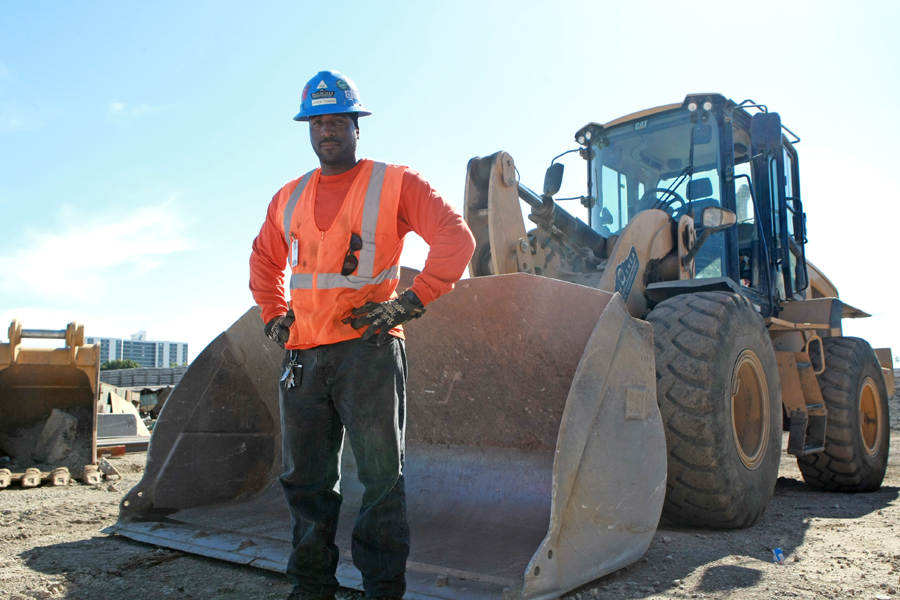 Jason Thomas is an operating engineer. He was trained by Operating Engineers Training Trust - Local 12, and hired by Walsh/Shae Corridor Constructors to work on Metro’s Crenshaw/LAX line. Photos by Jason Lewis

Thomas landed a construction job working on the Metro Crenshaw/LAX line, and he gives advice to others who are in his position.

“My job is something that I love to do,” Jason Thomas said.

Thomas spends his days operating heavy construction equipment at a site near LAX that will serve as a storage facility at the end of Metro’s Crenshaw/LAX line.  Working as an operating engineer is a stark contrast to the way that he spent his late teens through his 30s.

At the age of 18, not too far removed from being a star football player at Dorsey High School along with teammate Keyshawn Johnson, Thomas was convicted of 2nd degree murder.  At the time of the crime, he was a scholarship athlete at USC.

“During that 23 years, I worked on myself,” he said.  “As a result of that my values changed, my morals changed, and I matured.”

While in prison, Thomas met a man who was a former union worker.  After hearing about the ins and outs of a career in construction, Thomas wrote the Operating Engineers Training Trust - Local 12, seeking information about obtaining employment upon his release from prison.  Local 12 responded by mailing him an information packet.

After being released from prison, Thomas was able to find a number of odd jobs, but he was working nearly around the clock just to make a decent living.

“Sometimes I had three jobs at one time where I worked 20 hours (per day) between those jobs,” he said.  “It was difficult, but I did it because I was grateful for the position that I was in.  Being free and being able to provide for myself.  I can actually pay taxes.  I’ve worked in a warehouse for minimum wage.  It was taxing on my body, but I had to do it, and I wanted to do it.”

While bouncing around between low paying jobs, Thomas started the process to become a Local 12 apprentice.  He visited Operating Engineers Training Trust - Local 12’s website, filled out an application, and he was given a test date.  The test involved a lot of math, so he was tutored in algebra and geometry.

“With math, if you don’t use it, you lose it,” he said.  “It was hard, but the more I applied myself, the more I studied, the more hours I gave to it, it began to come back.”

After passing the test he began training, learning basic construction shop skills.  He learned carpentry, engineering, how to use the various tools, and the vocabulary that is used on a construction site.  After learning his way around a construction site, Thomas was called by Walsh/Shae Corridor Constructors, which is the company that is building Metro’s Crenshaw/LAX line.

“Once I entered into the union and paid my dues, I got a nice salary,” he said.  “On top of that I get paid vacations, retirement, medical, dental, and vision.”

Thomas’ position starts out at $28 per hour.  After completing the first and second step apprentice levels, he will be a journeyman, which can pay him up to $46 per hour with a lot of opportunities for overtime.  One long-term goal of a journeyman is to become a foreman.

With this job, Thomas has formed a new appreciation for what construction workers do.

“I kind of took for granted the roads I drive on, or the buildings that I walk into, for what it took to build it,” he said.  “It’s not just get materials and build on the land.  We have to dig and remove old power lines, or old pipes; or not damage existing gas lines that are there.  We have to lay down cement, and then we can start building.  And then we have to bring it up to grade, and make sure that the grade is at a certain angle.  That’s where our grade checkers come in, and they’re from Local 12 too.  I’ve been trained a little bit in that.”

While many people struggle to find employment after they are released from prison, Thomas did not have issues gaining employment in the construction field.

“The construction field doesn’t really care about your record so much,” he said.  “The only time, from my understanding, where it may come into play is if you are working on a site that is security sensitive.  But other than that, it’s really a non-issue.  It’s, can you do the work, and can you do it effectively, and can you do it safely.”

During Thomas’ time away from the job, he helps other people who are either currently incarcerated or formally incarcerated.  He is a member of the Anti-Recidivism Coalition (ARC), which is an organization that provides a support network for formerly incarcerated men and women, and advocates for fairer criminal justice polices.  The ARC assists men and women to integrate back into society with jobs and housing.

Through this organization, Thomas visits prisons to tell inmates his story, and he encourages them to make changes in their lives.  He has also made trips to Sacramento to speak with Governor Jerry Brown and other politicians about Senate Bills 260 and 261 (fair sentencing for youth), and Proposition 57 (increased parole chances for felons convicted of nonviolent crimes).

“These bills have not only helped those who are incarcerated, but also those who were formally incarcerated to obtain jobs, education, and skills to acquire jobs,” he said.

The ARC has a partnership with Los Angeles Trade-Technical College, which has a 12-week program that teaches people the basics of the construction field.

For anybody who is looking to get into the field of construction, Thomas advises them to visit the Operating Engineers Training Trust - Local 12 website at www.oett.net, fill out the application and start to study for the exam.