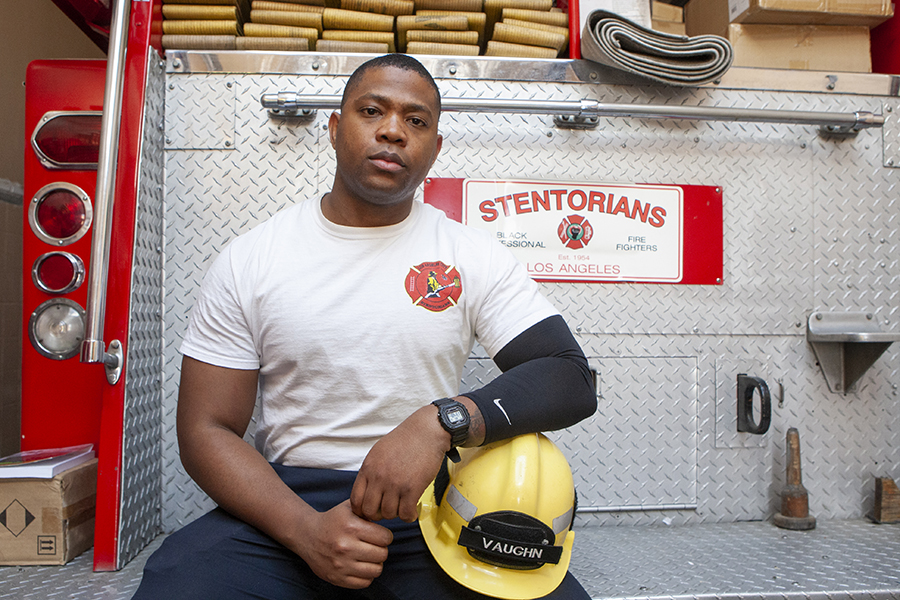 Vaughn was a star athlete on Dorsey High School’s football and track teams.  Now he’s starting a rewarding career as a firefighter.

Billy Vaughn Jr. spent his childhood and early adult years suiting up for athletic competition.  While at Dorsey High School, he played defensive back for the football team and he won the Los Angeles City Section championship in the 400-meter dash on the track team in 2013.  He went on to play football at San Diego State.

Now that his playing career is over, Vaughn will be suiting up in a new uniform.  He has been hired by the Los Angeles Fire Department, and he will be graduating this month.  Through his two years of preparation to becoming a firefighter, he sees several parallels between his athletic career and being a member of the fire department.

“They have so many things in common,” he said.  “The team aspect; the hard work; the daily grind of becoming something bigger than yourself; giving back to your home community.  You represent not only yourself, not only your team, but the city.  So it’s a great way to serve my hometown and my people.”

When Vaughn started to look into a career with the fire department, he was looking for stability in his life, as his son was born in 2019.  He applied to the fire department in February of 2020, which was when he joined the Stentorians of Los Angeles City, a non-profit community-based organization for African American firefighters.  The organization shares a building on the corner of Vernon Avenue and Normandie Avenue with the Los Angeles County Stentorians.   With the Stentorians, Vaughn received firefighting training as well as guidance through the hiring process.

After passing the firefighters candidate assessment written test, it became a waiting game for Vaughn.  Instead of letting the idle time pass, he took a proactive approach.

“Being that there was so much time because you’re waiting to be selected, I wanted to stay busy,” he said.  “So I came up here (Stentorians headquarters) volunteering, learning as much as I could.  I earned my fire technology certificate.  So I’ve educated myself a good amount.”

Vaughn was selected for an interview in September of 2021.  He took classes to obtain his Emergency Medical Technician certificate, and he obtained his Candidate Physical Ability Test certificate.  After passing the background investigation and the medical and physic evaluation, he was offered a job.  The next steps are the drill tower and then graduation.

Being a member of the Stentorians helped Vaughn a lot during his process.

“They’re amazing with hands on work,” he said.  “With ladders and hoses; with the culture of this specific department; the process.  Many of the members of the Stentorians call and check on me.”

While going through the two-year process to become hired, Vaughn worked various jobs.  He had stints at Costco, as a security guard, and he’s currently a lab technician in Calabasas.

“I had to support my son, but I also had to pursue my dreams and my goals,” he said.  “So it was tough days when I didn’t get much sleep.”

There will be one final ritual that Vaughn will need to pass.  At the graduation, there is what’s called “jumping for your badge,” where the fire fighters jump from a five-story ledge on the fire tower.

“I’m looking forward to that,” he said.  “At that point, you go through the whole tower, I’ll go through that.  That’s cake.  I’ll do that more than once if I have to.”