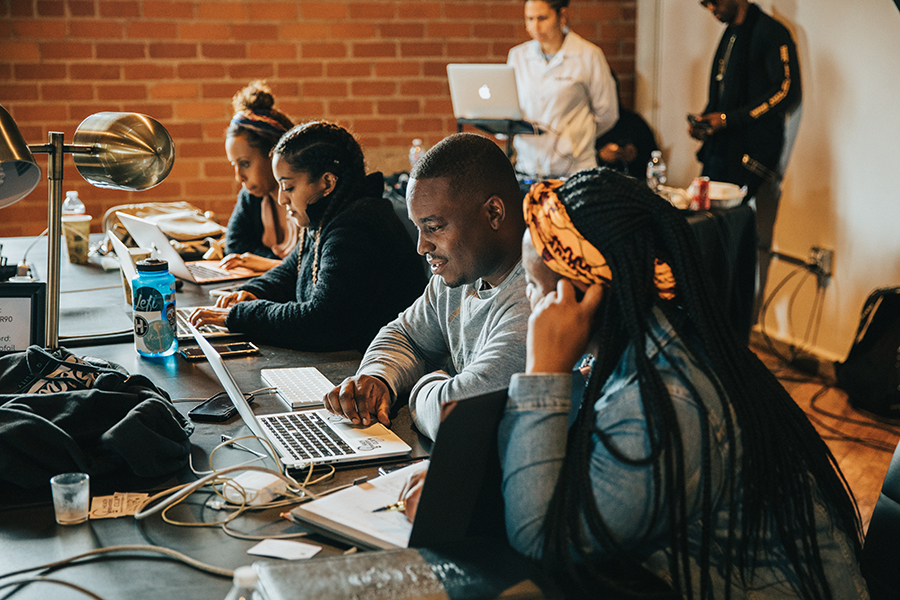 The coworking space is a cultural hub that encourages entrepreneurs in the memory of Vector90 co-founder Nipsey Hussle.

When the late rapper and South Los Angeles icon Nipsey Hussle opened Vector90 along with business partner David Gross, who is also a South Los Angeles native, it was more than just a coworking space.  It was more than just a place to work at when entrepreneurs, independent contractors and writers got tired of sitting in the back of the local Starbucks.  Vector90 was created to be a cultural hub and incubator to promote economic and social growth.

“Vector90 was founded to be an anchor in the community for the purpose of stimulating entrepreneurial opportunities for not just the residents in the Crenshaw district and around Slauson, but the idea of providing resources to underrepresented entrepreneurs,” said Halleemah Nash, a consultant who manages community partnership for Vector90.  “We want to ensure that African Americans, Latinos, women, and women of color have access to resources to start their own businesses, and to ensure that their businesses are thriving here in the neighborhood.”

Over the last 20 years, coworking spaces have been popping up in major cities around the nation.  But most of them are outside of Black neighborhoods.

“Coworking is something that’s booming all around the country,” Nash said.  “The landscape of the labor market and how folks are working is changing, so the idea of creating a coworking space, where people can come into the Crenshaw district to work at a Black-owned space, and provide a service for people who are already in the neighborhood, was a double win.  If you live in South Los Angeles or Inglewood, you can come right here to Vector90 to get those same resources that are available at the WeWorks of the world.”

Vector90 offers monthly memberships that give people access to a desk in a shared space.  Many people who work from home utilize these types of spaces to get away from distractions in and around their residence.  Along with being able to work outside of the house, Vector90 has also created an environment that creates networking opportunities.

“You’re also working around a lot of other entrepreneurs,” Nash said.  “So this provides robust networking opportunities where so many different kinds of folks who are early in their businesses, managing startups, folks who have been at it for a long time, people in tech, people in education, people in STEM, are all in one shared space working on their projects.”

“We have a member who has their own tax service company,” Nash said.  “So they’re meeting with their clients during tax season.  They’ll rent a conference room every day for five straight weeks.”

Vector90 hosts a “Burnout” event that motivates people to complete tasks that they may have pushed off to another time, and to help people meet tight deadlines.

“On a Saturday, from 8 a.m. to 8 p.m., we ask all of these entrepreneurs to come together and burnout their work projects,” Nash said.  “Just go hard in the paint for 12 straight hours.  We’ll have 100 people, head down, grinding.  We’ll also have a taco truck set up outside”

Vector90 has formed partnerships with major corporations and they host events that are beneficial to their members.

“In the last 30 days we partnered with Black In Tech Los Angeles and Google for an event where we talked about the Black tech ecosystem and the emergence of African Americans in technology here in Los Angeles,” Nash said.  “We had folks from all around L.A., from Playa Vista to downtown L.A., and people who are in our neighborhood, that were here to network with other folks; to learn about how they got their spot in the Googles, and Facebooks, and Snapchats of the world.  And we also partnered with Complex Magazine for their Complex Community Week.  We provided a workshop on healthy eating, and we highlighted a couple local businesses, like Hank’s Mini Market which is right here in Hyde Park.  We also hosted an event about real estate development and the power of owning commercial real estate and your own businesses.”

“We hosted a Mayor’s panel here where Mayor Eric Garcetti along with (Presidential candidate) Cory Booker were talking about nonviolence prevention and they spoke about some of the organizations that are combatting violence.  Los Angeles City Councilman Marqueece Harris-Dawson was here for a panel where we were talking about the importance of community ownership; what’s happening in terms of community development from a policy perspective; how people can engage and get involved.”