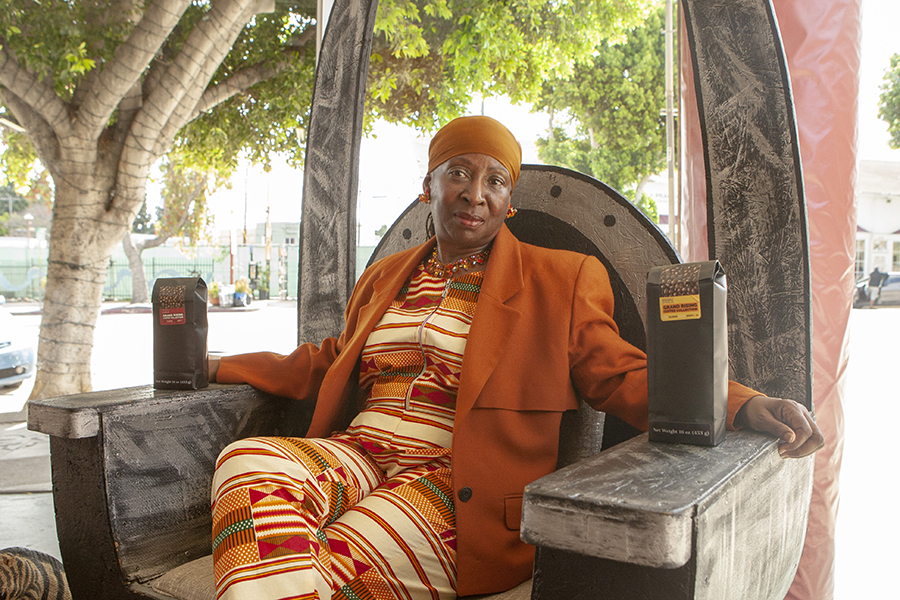 Leimert Park Village, still a center of Pan-African thought and expression through its art, music and culture, is one of the most recognizable Pan-African Cultural Districts in South Los Angeles.  The village has seen its share of ebbs and flows, yet it still rises like the Phoenix.

Today, you will find an increasing number of nationalities from Nigeria, Senegal, Ethiopia, Tanzania, Uganda, Brazil, Belize, Kenya, Dominican Republic, Haiti, Ghana gathering at the Hot & Cool Café and the WE CAN Foundation merging their experiences of Pan-African thought and expression through business, foods, arts music and culture.  The West side of Crenshaw Boulevard has always maintained its share of businesses from all parts of the Pan-African diaspra, and new businesses are emerging.  International trade and commerce is in full effect in the village and along Crenshaw.  Art and music are not the only commodities from the Continent emerging in the Village.

South Los Angeles Logistics is a company based in Leimert Park that facilitates trade and commerce worldwide.  COO, Khalifa Bey became interested in international business over 30 years ago while working in an international trade practice group of a major law firm.  While at the firm, she assisted attorneys who were involved in shaping the North American Free Trade Agreement (NAFTA).  In her role as legal secretary, she researched country profiles which included history, politics, and economic background of countries and territories.

In 2009, one year after the U.S. financial market crash, Bey decided  that she needed to head a company that was recession proof, international in scope and people friendly and her family established O’Day & Sons,  a boxes, packaging & shipping store (to off-set estate taxes in effect at that time) on Historic Central Avenue, the community in which she grew up.

As Managing Partner, she handled the day-to-day operations of the business from customer service, weighing and packaging  to determining best routes.   Monthly reports began to reveal that after six months of operation, reports began showing a sharp increase in overseas shipping.  It was decided at that time that the marketing focus percentages would decrease from domestic to increase international with an emphasis on ocean shipping, and the company name was changed to South Los Angeles Logistics (SOLALogistics), a shipping, warehousing, distribution and fulfillment company.

In Winter 2017, a Facebook post appeared in Bey’s news feed about a group that had gone into several African countries and developed primarily agricultural relationships with governmental agencies and local farmers.  She watched the development of the Ledge Group bring fair trade practices, stabilization and economic growth to the agricultural sectors in several countries where they have relationship.

As Bey continued following the group, the story of the Ugandan Coffee farmers took center stage.  Ugandan farmers were not being paid fair prices for their harvest so a decision was made to let the coffee die on the vine rather than sell their harvest for less than its  worth.  The Ledge Group approached the Ministry of Coffee in Uganda and shortly thereafter, the relationship between The Ledge Group and the farmers was created offering more than fair trade prices for their crops.

Enter South Los Angeles Logistics.  At the same time as the Starbucks mistreatment of two Black men happened, the Ugandan coffee was ready for harvest.  The next step was to bring Ugandan coffee to the market. The Ledge Group needed to further their supply chain to include a shipper, a coffee roaster, fulfillment and a distributor.  All the capabilities that SoLaLogistics offers.

In September or 2018, Ugandan raw coffee beans arrived at SoLaLogistics warehouse in Compton.   Shortly thereafter, members of the Ledge Group came from various parts of the U.S. for a tasting that was held at the Hot & Cool Café in Leimert Park.  Since then, Grand Risings Coffee has been distributed throughout the United States, including Alaska and South Korea. Grand Risings Coffee “Peaberry” and “AA” are available in 4 oz. 8 oz. and 16 oz.  Email: This email address is being protected from spambots. You need JavaScript enabled to view it..

Bey understands that business owners cannot limit themselves to just the U.S. economy.  Statistics are that only one percent of American businesses export.  Exporting through e-commerce is an excellent beginning.  Quality products from the U.S. is always in demand.  Locating a market for your product or service takes research.  If your product or service provides a solution or fulfills a need it is bilateral.  All economies ebb and flow. How are you going to position yourself in this global economy?

The LA South Chamber of Commerce and South Los Angeles Logistics is presenting a seminar:  What it Takes to do Business in Africa, Tuesday, April 9, 2019 at the Barbara Morrison’s California Jazz & Blues Museum, 4317 Degnan Blvd., Los Angeles, CA 90008, 11:00 a.m. to 2 p.m.  Light refreshments will be served. Cost $15.  Register at www.LAsouthchamber.com

For those interested in shipping or other logistics services contact:  Khalifa Bey,  South Los Angeles Logistics, 4329 Degnan Blvd., L.A., CA 90008 – 310-846-1112.  Email:  This email address is being protected from spambots. You need JavaScript enabled to view it..  Website: www.solalogistics.com.