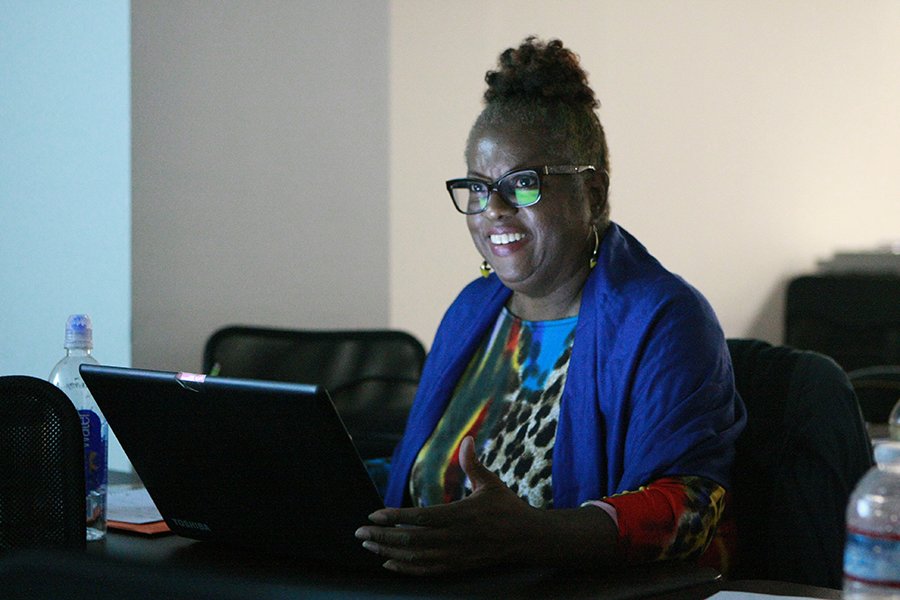 Workshop participants bring their laptops and receive on the spot training to create a website, and then they learn how to monetize it. Photos by Jason Lewis

This weekly course at The Los Angeles Urban League teaches people how to produce revenue on the Internet.

Practically everybody is on the Internet.  From toddlers to centenarians, the vast majority of people are plugged into the web. With such a massive audience, many people have found ways to simply make a side income, and some are making an exorbitant amount of money.

One great thing about making money on the Internet is that it doesn’t take a large, or even small, business to produce revenue, and you don’t have to be a celebrity to create a large audience.  Many everyday people have found ways to make upwards of $50,000 a month, and more, by creating online content.  This prompted Crystal Mitchell, co-executive director of Recycling Black Dollars and the co-host of The BusinessZone with Crystal Mitchell and Gilbert Buchanan, to partner with Armand Santos, creative director of Prometheus, to create a  weekly digital marketing workshop at the Los Angeles Urban League.

“The Internet is something that everybody uses on a daily basis,” Santos said.  “They see things there, but don’t understand how other people are taking advantage of it to increase their wealth.  These workshops let you know how people are leveraging that to find financial independence.”

People do not have to be too tech savvy to create online content, as Santos said that the only ability a person needs is to be able to get on the Internet.  Also, a person does not have to sell anything to make money from the web.

“Almost anybody can do something online to help themselves,” Santos said.  “Obviously somebody with a physical business needs to be online to promote that business.  You can also use an online presence to create a digital business that sells things.  Now beyond that, a person can use an online presence to create interesting content that draws people in to read it.  Because of the structure of websites and marketing, you can make money from that traffic without anybody ever having to buy something.”

This workshop covers a wide range of topics, such as how to setup a website from choosing a hosting plan to installing a template; social media platforms; apps; marketing; and business practices.

Santos has shown the group members examples of websites that are producing several thousands of dollars on a monthly basis.  One of those websites is Pinch of Yum, which is a food blog that has an Instagram following of over 700,000 people.  That website, which was created by a 4th grade teacher, shares recipes and takes engaging photos of food.  According to the website, the creator of it is now a full-time blogger.

Santos said that the most viewed website is Google’s homepage, and the second most is YouTube.  Many people have built a large following by producing videos on a daily basis.  A page like TheQuartering, which has over 200,000 YouTube subscribers, features a man who creates very simple videos of himself talking about comics, the video gaming industry, and random topics that interests him.  His set up is as simple as putting either his mobile phone or D-SLR camera on a tripod, pointing it at himself, and hitting the record button.  He has a simple microphone set up for the sound.  It is something that anybody can do at their home.

Another popular YouTube user is Kvng Guap, who is 18-years-old and makes videos of his reaction to listening to old-school hip-hop songs for the first time.  In only seven months, he has nearly 70,000 subscribers.  It appears that he makes these videos in his bedroom.

Many people who are making money online are producing revenue through ads (which they do not have to personally sell), affiliate marketing, selling their own products, sponsorship, and membership.  Santos breaks down all of those in the workshop.

Being online can be expensive, as most corporations have large budgets for their websites and social media platforms.  But for many people, it can be pretty inexpensive to create a blog and set up social media pages.

“The cool thing about being online is that it doesn’t cost a lot to be there,” Santos said.

For more information about this workshop, contact the Los Angeles Urban League at 323-299-9660, and visit their website at www.laul.org.  The Urban League is located at 4401 Crenshaw Boulevard, Suite 201.