The Crenshaw Boulevard and 66th Street location is the first Papa John’s in South Los Angeles.

The Young family’s favorite pizza restaurant is Papa John’s, but there wasn’t a location that serviced their area in South Los Angeles.  The closest Papa John’s locations were in Culver City and Inglewood, meaning that they could not have the pizza delivered to their home.

Josslyn and Jarvis Young spoke to their neighbors, and it appeared that they were not the only ones who would want the pizza restaurant in the neighborhood.

“From our understanding and from what people have told us in the surrounding areas, they’ve been missing a Papa John’s, and we wanted to bring one to the community.”

The Youngs contacted Papa John’s headquarters to find out how the franchise could come to South Los Angeles.  After hearing about the process, they decided to be the ones who bring it to their area. Their qualification process began in December of 2015.

While many people in the community are happy to have a Papa John’s in their area, the more impactful part of the Youngs efforts is that it shows that people from their community can be a part of a national corporation.

Josslyn grew up in Inglewood and attended Inglewood High School.  She went on to graduate from UC Irvine, and she is a real estate broker for Keller Williams.  Jarvis grew up in Carson and attended Westchester High School.  He attended UCLA and he is currently an aerospace engineer at Northrop Grumman.  While they both are established in their careers, they see the value in starting a business in their own community.

“It’s important for entrepreneurship for Black people,” Josslyn said.  “Starting something of your own is great for anyone.  I think it’s a benefit to create wealth, build your own, be able to work for yourself, and determine what you want to do.”

The Youngs didn’t simply choose to go the franchise route because they enjoyed Papa John’s pizza.  They saw that they could be successful with a franchise, opposed to creating their own business.

“With a franchise, it helps if you haven’t started a business because there is assistance in how to get the franchise started,” Josslyn said.  “There’s a system in place that you follow to help you get the franchise up and running, so you don’t have to try to figure it all out on your own.  It helps you make that business profitable.”

Not only will their family benefit, but the community will as well.

“A lot of the community is very supportive that there is a Black owned business,” Josslyn said.  “We’re giving job opportunities to the community, and we’re going to do scholarships for the neighborhood schools.”

Currently the Youngs are looking to hire delivery drivers.

Jarvis will keep his day job at Northrop Grumman and help out at Papa John’s during his off hours.  Josylnn is going to work at Papa John’s on a daily basis, and she will continue to work as a real estate broker.

There has been a backlash on social media against the Youngs opening a Papa John's, mainly because of the comments from the former CEO.

When I first heard about a Papa John’s coming to Crenshaw, I had the same knee-jerk reaction that many people had.  I questioned why it was coming, seeing that the CEO made the negative comments a few months ago about NFL players and the national anthem protest.  But when I heard that this Papa John’s was being opened by a black couple, I was extremely interested in this story.  I went down there to speak with them, and after a conversation, I’m totally on board with what they are doing, and all of us should be.

People are saying that the Youngs didn’t do their homework when they opened this restaurant, or that this is a P.R. move by Papa John’s because of the recent negative press that they have received.  With all due respect, those thoughts are extremely off base and short sighted.  As this article states, the Youngs began the process to open this store over two years ago.  The now former CEO of Papa John’s made his comments about four months ago, as the Youngs were nearing their opening date.  Contacts were signed, and a lot of money and time was spent by the Youngs to make this happen well before the controversy.  I’d say that the now ousted CEO of Papa John’s pretty much screwed the Youngs with his comment, because now there is a major backlash over a franchise that the Youngs bought in to.  Now, I’m sure that people will say that they should have backed out (and they considered it).  Well, it’s easy for people who do not have any time or money invested into this to say that, and the Youngs had to make some extremely tough decisions after the ousted CEO's comments.  But I’ll say that most if not all of the detractors, if they were in the same situation as the Youngs, who more than likely would have faced serious financial losses for backing out, would not have backed out.  It’s very easy to say that you would have, but I seriously doubt anybody would.

Now, we should get behind the Youngs, because they are exactly what we complain that we don’t have in our communities.  They stepped up, took the risk, and put their money where their mouth is.  We complain all the time that we don’t own businesses in our own communities.  That other races come in here, make a lot of money off of us, and then ship that money right out of here.  We always want to see more black ownership in our communities, whether that be creating something new, or buying into a franchise.  Instead of condemning the Youngs, we should be using them as a resource.  That’s one point that this article was getting at.  A while ago I heard a black man talking about how we need to buy into franchises, because those franchises will always be in our communities, and you never see a McDonald’s close.  Most of these franchises are profitable, but we don’t benefit from them.  We need to be the ones who are bringing these franchises to our communities, not “other” people.  We need to encourage others to open businesses in our community, and the Youngs can be a resource on how to do that.  The Youngs are doing exactly what we’ve been looking for our people to do, but because some CEO starting shooting off at the mouth, now they Youngs have to deal with the backlash and not receive the support from us that they should be getting.

One final point.  People went crazy when the Liquor Bank (Korean owned) lost their liquor license.  I’m pretty sure that the money produced from that liquor store (which we have too many of) left our community on a daily basis and was used to enrich the owner’s community.  I don’t think that there is much of an issue with Louisiana Fried Chickens in South LA being owned by Cambodians (I don’t have a problem with it).  With the gentrification issue ripping through our communities, we all want to see businesses created by us.  Now we have one, and some of us are having that crab in a barrel mentality.

With all that being said, support the Youngs because that supports us! -Jason Lewis, Los Angeles Standard Newspaper Publisher 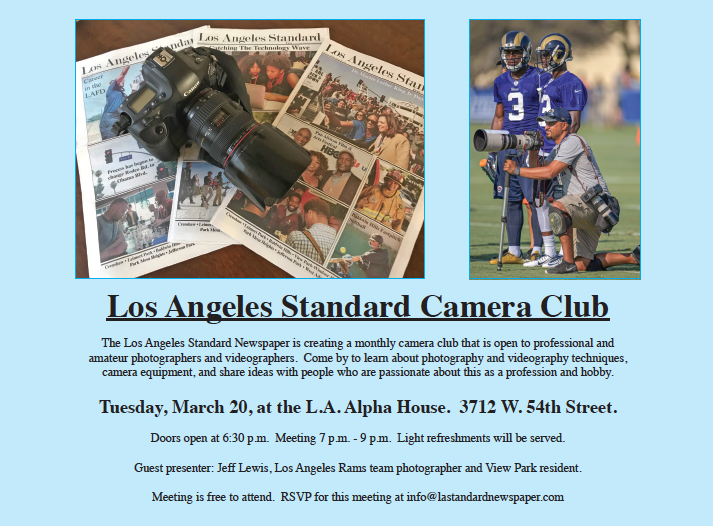