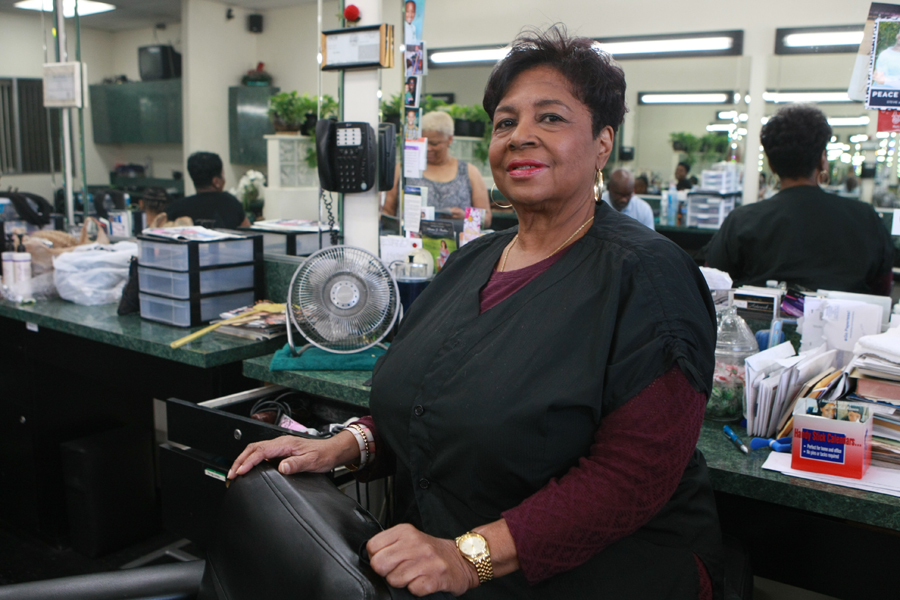 After working at a barbershop for 16 years, Mae Shaw decided to go into business for herself. She opened A Kut Above Hair Design 20 years ago. Photos by Jason Lewis

Mae Shaw figured out as a young adult that she needed control over her earning potential.  After struggling to obtain pay raises in the corporate world, she became a barber so that she could better dictate what her income would be, and that led her to opening A Kut Above Hair Design on Crenshaw Blvd. and Exposition Blvd.

Shaw is from Little Rock, Arkansas, and she moved to Los Angeles as a teenager in 1961.  She attended Fremont High School, and then took secretarial courses at L.A. Trade Tech for two years.  After school, she held jobs as a word processor, but she found that the income was not what she wanted.  That led her to going into business for herself as a barber.

After taking classes to become a barber, Shaw worked in Leimert Park, and then for 16 years at a barbershop on Washington Blvd. and 10th Ave.  When the owner of that shop was looking to sell it, she inquired about purchasing it.  But the shop was sold to another woman.

“I guess she had the money right then to start,” Shaw said.  “So I decided that I should see about opening my own shop, and that’s what I did.”

One of Shaw’s clients was Wayne Bradshaw, who was the CEO of Family Savings Bank at the time.  He recommended that she contact Pacific Coast Regional (PCR) Small Business Development Corporation.

PCR helped Shaw create her business plan and financial statement, and then she sought out a loan with them.  To her surprise, they were willing to give her more money than she thought that she needed.

“I asked for a small loan,” she said.  “I would say maybe about $7,000, and they said, ‘Mae, you’re going to need more than that to get started.’  They asked me for my projections, and then they said, ‘You’re not going to make it with only $7,000.  You need some capital to hold you until you can build up.’  I wasn’t thinking about the capital that I needed to hold me for all of the overhead that I would have.”

Shaw found the location where she wanted to open her new shop, and she was able to obtain a $25,000 loan from PCR.  From that point on, she thought as a business owner, and not an employee or independent contractor.  One of her priorities was her credit score.

“I was very conscious about paying my bills on time, and getting my FICO score high,” she said.

Shaw also had to take on greater responsibilities.

“Everything is on the person that owns the business,” she said.  “You have to make sure that all of your overhead is taken care of.  You have to deal with the operators (barbers).  You have to keep your own books.  You have to see that the shop runs efficiently.  A lot of those things, I didn’t have to do when I was working at somebody else’s shop.  I could just come in during the mornings, line up my clients, and take care of them.  At the end of the day I could leave.  Well I can’t do that now.  Usually I’m the first one here, and the last one to leave.  If something goes out here, I have to take care of it.”

Being an employer was also a new challenge for Shaw.  Some of the barbers from the shop on Washington Blvd. came with her to A Kut Above.  Greg Reed was one of them, and he has been instrumental in keeping the business going.  Shaw has seen many barbers come and go, which has put stress on the business.

Shaw has also had to make sound financial decisions.

“It’s difficult,” she said.  “It seems easy, and it’s nice to own your own business, but you have to be prepared for the ups and downs, because there will be some downs.  And I’ve found that you have to be disciplined, especially with money.  You’re getting money everyday.  If you’re not disciplined about how and where that money is going, you can be flat on your face in no time.”

“I said, ‘Yeah, we’ve lost costumers,’” she said.  “That was during the second time where I really had a low point as far as business is concerned.  A lot of customers complained that they couldn’t get to the shop because the streets were closed down.”

PCR manages Metro’s Business Interruption Fund, and they were able to give Shaw the funds that she needed to stay in business.

Even with the difficult moments, Shaw would not change her position.