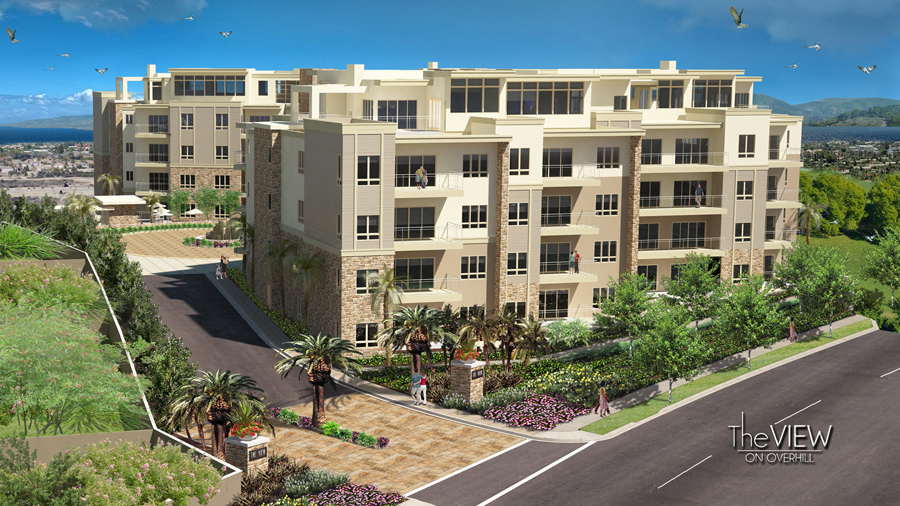 A rendering of the proposed complex called “The View on Overhill” from the Overhill Dr. side.

The vacant lot between Overhill Dr. and La Brea Ave., just south of Stocker St. in the View Park and Windsor Hills area is one step closer to being developed.  But the United Home Assocation II (UHA), which services that area, has strongly objected to the The Bedford Group’s plan to build an upscale, five-story, 88-unit condominium community.

This luxury condominium project will include a resort-style pool, private resident clubhouse, a business center, and “breath-taking” panoramic views.  The units will be priced from $400,000 to $700,000.

Many local home owners have opposed this project, saying that it will add more traffic to an already congested area and ruin the views of the city, which attracted many people to purchase homes the area.  There are also concerns related to gentrification, as residents believe that people who live in the vicinity will not be able to afford to live in this new complex.

The Regional Planning Commission voted 3-1 at a packed hearing in downtown to approve The Bedford Group’s application.

“We feel that it was legally and ethically incorrect,” said John Heath, UHA board member.  “There will be a second hearing with the full board of Supervisors and we’ll go from there.  It’s definitely not over.  The fight continues.  That was just round one.”

The traffic issue is a major concern, as cars travel at high speeds through that area.

“Traffic is already bad,” Heath said.  “Not only is this going to increase congestion, but we feel that it’s a very hazardous location to have folks slowing down to turn in or turn out (of the complex).”

The plans for the complex will put the entrance/exit on the Overhill Dr. side.

Darren Gooden, Sr. Director of Sales for The Bedford Group, does not think that the traffic will be an issue.  With 88 units, the amount of cars parked at this complex would be around 176.  But those cars would not be on the move at the same time.

“I don’t think that there is a building in L.A. that has all of its residents coming and leaving at the same time,” Gooden said.  “What the traffic study report states is that you’re looking at 60 cars contributing during the peak hours in the morning and in the evening.  Sixty cars contributing to the traffic flow on Overhill will not make a tremendous impact on the current traffic pattern.”

The proposed 65-foot height of the complex has been an issue.  The area is zoned for structures that top out at 35-feet tall.  The Bedford Group has asked for an extension over that limit of 30-feet to build the five-story structure.  There are six homes on Onacrest Dr., directly south of the development site, that would have their northern view affected.

“The coldest part about this is that their main selling point is a commanding view of the city and the ocean,” Heath said.  “And yet you’re blocking six houses right there on Onacrest Dr. and Dawn View Pl. from their normal view.  So you’re appropriating somebody else’s view to create a business opportunity for yourself and devaluing their property.  That’s not what I’d consider a neighborly thing to do.”

The President & CEO of The Bedford Group, Charles O. Quarles, lives in the area.

According to The Bedford Group, this complex will not take away any home owner’s view because the vacant lot sits at the peak of the hill.  There are no homes to the north, east, or west of the site.

“Most of those home (owners), I would think, purchased their property because they have a view of the ocean, and the (LAX) flight path, which is the southern view,” Gooden said.  “And that’s the orientation of the houses that are built there.  Whenever an architect builds a house, they look at the highest invested use of that lot.  Where should the windows be?  Where should the front door be?  Where should we point it?  All of those homes (on Onacrest Dr.) face southbound, which is where the premium view is.”

Gooden also points out that each of the homes on Onacrest Dr. has a wall in its backyard, obstructing the view to the north.  Gooden said that the view over that wall is of a vacant lot, a commercial property, the flow of traffic on Overhill Dr. and La Brea Ave., and of advertising billboards.  He said that there are no views of downtown Los Angeles or the Hollywood Hills, and he also pointed out that even if the height of the complex was 35-feet tall, it would still block the current view to the north that those homeowners have.

“There is no view being obstructed from these residences,” he said.  “The million dollar view of the water (to the south) is still intact.”

At the hearing, one of the homeowners invited the developers to stand in her backyard to see the view that she feels is unfairly being obstructed.

Gentrification has been a hot-button issue in predominantly African-American areas of South Los Angeles, as many black residents are being priced out of the area.  The Bedford Group sees that project as a way to attract young black professionals.

“Windsor Hills, View Park is predominantly a single family community, which is great, and it does have a rich history,” Gooden said.  “It’s just that a lot of the people that were raised in this community are unable to buy back into this community.  Especially with the rising prices, the economy that we’re currently in, and Windsor Hills/View Park is no longer a secret.  It’s a community that has gotten a lot of attention since the recession.  So what’s happening is that young professionals, and even seasoned professionals, are having a very difficult time purchasing in this community.”

Gooden said that it is difficult for a young, and even a seasoned professional, to purchase a million dollar home.

“Most of those seasoned professionals need to obtain financing,” he said.  “When you have other (non-black) people moving into this community, bidding the prices up and paying cash to buy these homes, it makes it very difficult and sometimes impossible for members in that working middle class demographic to buy back into this community because prices now are now over $1,000,000.  To buy a $1,000,000 home, you have to, at a minimum, have $465,000.  I don’t know too many working professionals, young professionals, recent college graduates or even seasoned professionals who have peaked in their earning potential.  Purchasing in this community is difficult.”

Gooden explained that communities in Beverly Hills, Culver City, Westchester, Playa Vista, Marina Del Rey, and Silicon Beach also have million dollar homes, so building luxury condominiums and townhouses, which are less expensive for the home buyer, has attracted the demographics from those areas who cannot purchase expensive real estate.  He also said that purchasing a condominium can lead to a larger purchase in the future.

Heath does not believe that this project will attract locals.

“The developer is talking about targeting an ethnic market, but there is something called the Fair Housing Law that restricts you from showing any type of preference in terms of race,” he said.  “That’s just some developer speak in terms of trying to hold units or offer them to up and coming young black professionals or first-time home buyers who happen to be African American.  But the people who are working over there in Silicon Beach and Playa Vista, when they hear about this, and they already know how great our neighborhood is, they’re going to be first in line.  And they’re not writing checks, they’re bringing cash.”

Gooden said that since the Regional Planning Commission approved The Bedford Group’s application, he has received numerous phone calls from people who are interested in purchasing a unit.

“We’re talking about members of this community,” he said.

The UHA II has appealed the Regional Planning Commission's decision, and the next hearing will be held on October 24.  That hearing will be with the County Board of Supervisors, and it will be open to the public.

To find out more about the UHA II’s position, visit their website at www.uhawhvp.org.  There is a video of homeowners discussing their displeasure with this project.  Click here to watch the video https://youtu.be/BfsNCktz17g

To find out more about this development project, contact The Bedford Group at (310) 568-8500, or visit their website at www.thebedfordgroup.com.  They also have a video promoting this project.  Click here for an overview of the project, and click here to watch the video https://www.youtube.com/watch?v=LOGh4t0w118