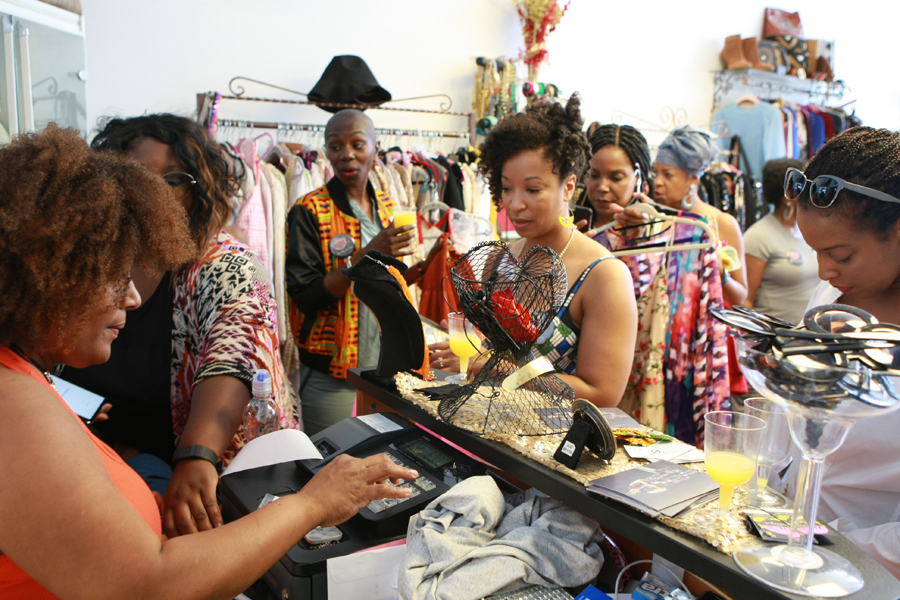 Members of the tour purchase clothes at Zoe’s Vintique in Mid City. Photos by Jason Lewis

Last fall, Mone’t Lamb stopped by a local beauty supply store that she heard was black owned.  In her excitement, she did a Facebook Live video while at the store, and the video received an unexpected amount of likes, comments, and shares.

This simple video helped get the word out to locals about the beauty supply store, and other local business owners reached out to Lamb, inviting her to their establishments.

“One of the Facebook users mentioned, ‘you should do a black business tour,’” she said.  “It just gave me the idea to put it to name, and the business was kind of birthed from there.”

Lamb’s next step was to stop by black-owned businesses, where she shared photos and videos on social media.  Her long-term plan was to create an actual bus tour, but she thought that she was a ways from making that happen.

The response to her visits to local businesses was so great that she had to speed up her timeline.

“What drove me to start it now was that I had some people asking me questions about how they can join the tour, and where they could go to find a seat on the bus,” Lamb said.  “At the time, there was no seat on the bus, because this was something that I had foreseen to be something in the future.”

With the growing momentum that the Black Business Tour had, Lamb hired Del Amo Limousine, which is black owned, to provide a luxury bus with a driver.  She then created a schedule with stops at The Creative House (122 N. Market St, Inglewood), a collective of artists, educators, and scholars dedicated to the enlightenment of the community through art; Zoe’s Vintique (1410 S. Redondo Blvd., www.zoesvintique.com), which carries one of a kind vintage clothing; Nobody Jones’ Boutique (5593 W. Pico Blvd., www.nobodyjones.la) which has women's ready-to-wear contemporary clothing at affordable prices without compromising great quality; and Runway Boutique (807 S. La Brea Ave.), which empowers women through fashion, and embraces every style of a woman to make her feel fabulous.

For lunch, Lamb contacted Mardi Gras Catering (1414 S. Redondo Blvd., www.mgc213.com).  Chef Noel Saucier creates quality Creole cuisines with technique that he gained from a number of Louisiana cities and parishes along with the knowledge he received as a young boy in his uncle’s restaurant near Baton Rouge.

The first tour took place this past June, and the reviews from the group that took the tour were great.

“The feedback that I got from the people on the tour was that it was an absolutely amazing time,” Lamb said.  “They appreciated the intimacy of the smaller group.  They felt like the businesses went above and beyond for our coming.  Each and every site that we visited had something prepared for us.  I wasn’t even aware of the bells and whistles that they were going to pull out to impress us.”

The business owners were also pleased with the tour.  They reached out to her individually, and they all had good days financially.

With the very first tour, Lamb accomplished the goal of introducing and connecting consumers to black businesses.  She’s highlighting businesses that may not have the resources to advertise to the masses.  Lamb understands the need to promote local businesses.  She is from South Los Angeles, attended Inglewood High School and California Design College, and created the Fashion Driven Truck, which is a mobile boutique store.

“It was very exciting for the Black Business Tour to be on the ground floor, introducing black consumers to businesses that they otherwise may not have ever visited, and some of the people on the tour admitted that they had been in those communities before, or had been driving by for years, but had never taken the time to stop in,” she said.  “So that means that the goal of what the Black Business Tour is trying to do, which is to introduce the consumers to the businesses, was a success.”

Lamb’s plan is to have this tour happen monthly.  To join the tour, visit www.theblackbusinesstour.com or email This email address is being protected from spambots. You need JavaScript enabled to view it..  Also find them on Facebook, Instagram, and Twitter.