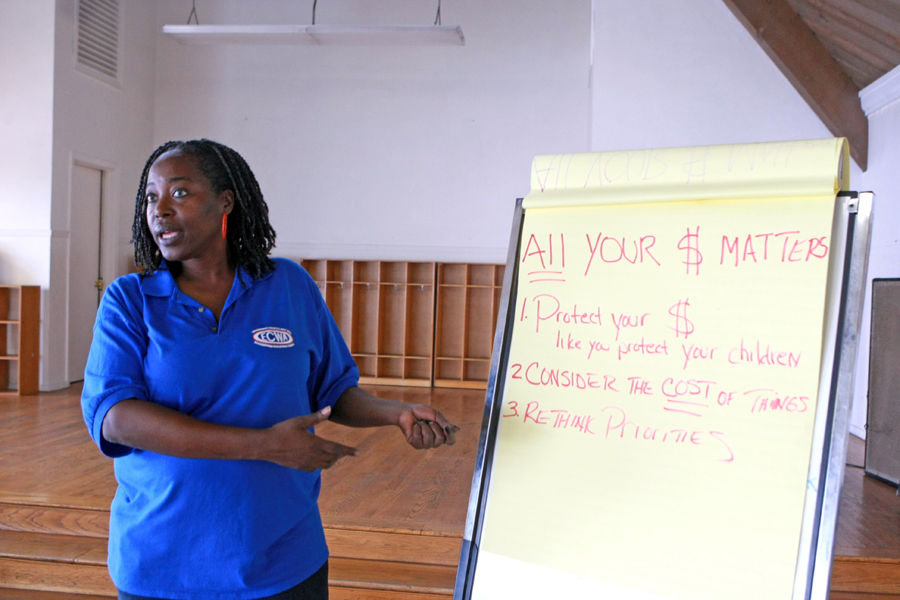 Misty Wilks is working to cause a paradigm shift in the way that people of color think about money. Photo by Jason Lewis

The greater Crenshaw area in South Los Angeles is undergoing a facelift that has many long-time residents worried that they will be priced out of housing.  Home values and rent for apartments are on the rise, and many people need to quickly adjust to the changing area.

The Empowerment Congress West Area (ECWA) Neighborhood Council, which services the Baldwin Hills, Crenshaw, and Leimert Park areas, has tasked their economic empowerment committee with finding ways to enhance community members’ ability to produce higher incomes.  The committee held the “Surviving This Economy” workshop in early March, and they have plans to host future business seminars.

“There are a lot of changes going on in our community right now,” said Jamal Jones, co-chair of the committee.  “There’s a lot of development happening, but at the same time we have a lot of Angelenos in the city that are struggling with affordability.  So how do we get folks (financially) competitive?”

The goal of the workshop was to provide community members with information and inspiration to encourage them to enter into the business field.  Topics included starting small businesses; micro-funding; purchasing a ready-made business; growing a business; the future of self-employment; and app-based businesses (Uber, Airbnb).

These topics are important for community members who may be falling behind financially.

“We struggle with a lot of issues, where there are discussions around gentrification, and people being displaced,” Jones said.  “So we want to make an effort to develop the people so that they can be competitive in this new economy that we’re seeing.  This economy is effecting a lot of middle-class and poor people, and they can’t afford it.  We’re showing people how they can make more money, create more jobs, and we can focus on future jobs.”

The development that is happening in the greater Crenshaw area has been in the planning stages for years, but many residents are being forced to react to the changes.  If people wait too long to adapt, they could be left without affordable housing, and when their children become adults, they may not be able  to live in areas where they grew up.

“We need to develop in the community a 15-year plan where we look at an industry, and then we can develop our 12 year olds, so that in 15 years, they’re going to be the ones that are ready for this economy.”

People have not been priced out yet, but that day could be coming sooner than later.

“Some people may have known that these changes were coming 10 years ago,” Jones said.  “We need to be in front of a lot of things instead of behind them, which is the purpose of this meeting.  It’s to try to get ahead before we’re behind.”

One of many ways to get ahead is through business ownership.

“We, as African Americans, will not have control of our own destiny unless we own something,” Jones said.  “We live in a capitalistic society.  Capitalism drives these changes, and black people, we’re just historically behind.  Look at who is buying all of the commercial real estate.  They don’t live in this community.  Their interest is going to be their interest.  Whatever is going to drive the business, it’s not going to be our interest.  If the community owns the land, owns the businesses, owns the infrastructure, and controls their own economy, then they can dictate their own futures.”

There are other issues that business ownerships can solve.

“We have issues of crime and poverty in our communities,” Jones said.  “The issues that we are afflicted with can change if we would create (business) opportunities for ourselves.  Jails and stuff like that are not the solution.  It’s economics.  Economics drives a lot of what’s happening.  That’s where we will have control over our own destiny.

“You look at that young brother breaking in a house, he may be hungry, he needs money, he needs something, but where is the opportunity for him?  Are the police the answer, or is it giving him a job?  And understanding and helping him become economically viable.  That benefits all of us because we won’t have to worry about crime.  Now we’re giving opportunities to our own people.”

Misty Wilks, who is a member of the ECWA and presented at the workshop, shares similar sentiments, and she is trying to get people to look at money differently.

“We’re trying to cause a paradigm shift in the way that people of color think in terms of money,” she said.  “We are often marketed to buy depreciable assets.  Cars, clothes and (car) rims.  We are rarely marketed to buy appreciable assets.  Stocks, bonds, and things of that nature.  I think that as the fear settles in the community about gentrification, instead of us rejoicing in our property values increasing, we are afraid that our property taxes are also increasing.  We’re worried that that extra couple thousand dollars a year could put us in foreclosure.  If we rethought how we thought about money, and had an understanding about the hundreds of different ways that you can make money on the side, perhaps we would be able to rejoice in what is happening in our neighborhoods.”

“If you’re on Facebook all day, on your iPhone, but you don’t own stock in Facebook or Apple, there’s a problem,” she said.  “If you own 19 pairs of Nikes, but you don’t own stock in Nike, you’re giving them your money, but you’re not in any way being able to get any of that (money that the company makes).  And as soon as you buy those products, it goes down in value.  You can’t recoup it.”

During Wilks’ presentation, she spoke about creating side incomes with Uber, Airbnb, and selling items on Craigslist.  She also spoke about the importance of investing in education to benefit the community.  She encourages people to divert 25 percent of their entertainment money to education, which she does to help send a child to Africa every year.

Financially supporting education could be investing in yourself, your children, or community programs.

“It can be your kids, your grandkids, or the kids next door, who you like and who you talk to,” Wilks said.  “He or she needs a math tutor.  Maybe you can help kick in in some way.  I feel that if we invest in our community, it all comes back.”

Many people may feel that cutting into their entertainment budget may be an issue, but Wilks believes that people spend too much money on entertainment.

“I have a client who has a very respectable job, but he was struggling with money,” she said.  “I asked him what his cable bill was, and he said $275 a month.  He had all of the packages.  I asked him why he doesn’t cancel that, or get a cheaper package.  He said, ‘well, what about my quality of life?’  Your quality of life is tied to your cable package?  Really?  Do you know what I can do with $275 a month?  You can get to Costa Rica for less than that.  But you’re sitting in your house everyday, watching television because Shonda Rhimes writes a heck of a story.  I love her, but I’m not going to construct my life around entertainment.”

The ECWA meets twice a month: on the first Saturday of the month at Crenshaw United Methodist Church, located at 3740 Don Felipe Dr., and on the third Monday of the month at the Department of Water and Power, located at 4030 Crenshaw Blvd.  The ECWA’s economic empowerment committee meets on the first Thursday of every month.  This is a volunteer organization that is open to the public.  For more information about the ECWA, contact them at (323) 325-1821, This email address is being protected from spambots. You need JavaScript enabled to view it., or www.ecwandc.org.