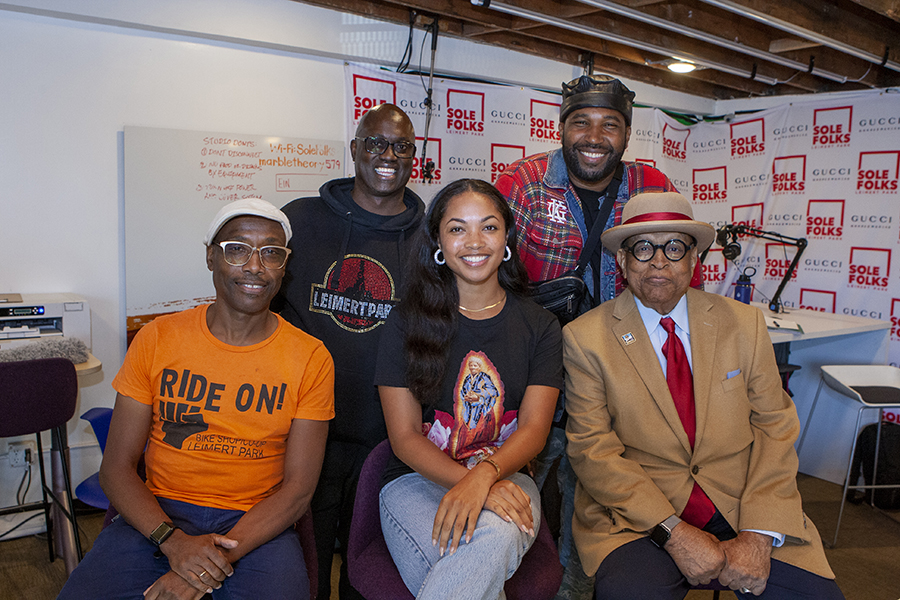 (L-R) Ade Neff, owner of Ride On! Bike Shop, Anthony Jolly, owner of Hot and Cool Cafe, Ariel Lawrence, CEO of Akin Co. LLC, Akil West, founder of Sole Folks, and Dr. Adrian Dove, founder of the Kingdom Day Parade. Neff, Jolly, West, and Dove were tenants of the building on Degnan Boulevard, and they are the now owners of the building. Photos by Jason Lewis

This transaction provides both stability and equity for Black-owned businesses that have been instrumental in Leimert Park’s recent resurgence. 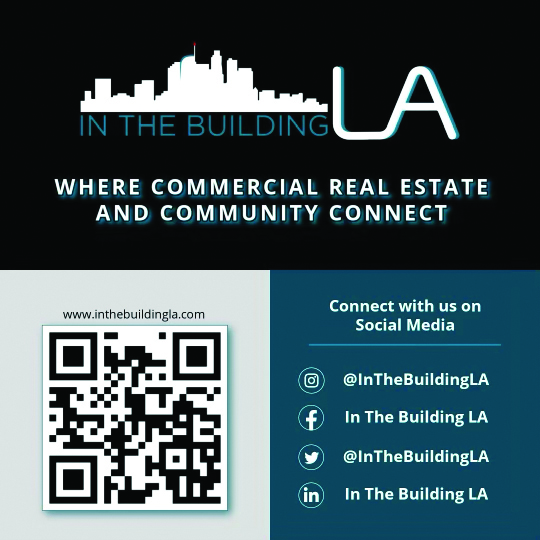 By Tina Sampay and Matthew Gates

Given the billions of dollars in investment capital pouring into South Los Angeles, the sale of a 70-year-old building in desperate need of repair may not stand out as a potentially pivotal moment in the future of Black Los Angeles.  However, unlike other deals that typically fail to center the existing community, this transaction provides both stability and equity for businesses that have been instrumental in Leimert Park’s recent resurgence, which is an aspect that long-time merchants in the village recognize as critical to its future.

“It’s very important to own the property in the neighborhood.  If you don’t own the property, then you could be put out at any time,” said Sika Dwimfo, a local entrepreneur that has run a popular jewelry store in Leimert Park since 1992.

Making the deal even more remarkable is that a collection of retail tenants with no prior ownership experience closed on a $6.5 million asset without spending a single dollar.  More importantly, at least to the individuals involved in the deal, the real significance extends well beyond this single purchase.

“It’s an example of what the community can do when we come together,” said Neff, a transportation policy advocate who has operated his bike repair shop in Leimert for years.

For Hot and Cool’s Anthony Jolly, the principles of group economics are reminiscent of his experiences growing up in Washington D.C.  It is also a message that he believes carries extra weight given Leimert Park’s position as the cultural epicenter for Black Los Angeles.

So while Jolly was admittedly hesitant when Sole Folk’s co-founder Akil West first approached him with the idea to purchase the building, Jolly knew the opportunity to build genuine equity in Leimert was simply too good to pass up.

“Where else can you go to find a collective group of people who are Black and be able to support products, services and come together in L.A?” asked Jolly.

While the sale directly challenges stereotypes that often limit greater participation in real estate ownership, the group’s execution from concept to close provides a framework for other Black people to follow.

“Shared ownership of commercial real estate is common within other communities,” explained Matthew Gates, a commercial real estate agent who represented the buyers in the purchase.  “Unfortunately, due to our experience in this country over the last 450 years, sometimes it is difficult for us to build the trust necessary to do business together.  Every day this group worked to build that trust. Ultimately, that’s why they were able to close this deal.”

In order to help navigate the buying process, the group tapped several community partners that provided strategic help along the way, including George Fatheree (Sidley Austin), Prophet Walker (Treehouse) and Shanita Nicholas – an attorney and co-founder of Inglewood’s Sip and Sonder, who helped the group craft their formal operating agreement.

“Bringing parties together for a singular vision requires a level of selflessness and forward thinking that embodies each of the members,” said Nicholas. “I’m proud to have had the privilege of being involved in the deal process.”

Finally, in an effort to add some technical expertise to the team, the merchants also brought on an up-and-coming development firm, Akin Co. LLC, as both lead developer and equity partner.

“We needed someone who had the language and history of making things happen,” acknowledged West.

By the time Treehouse’s Koreatown building opens in Spring 2023, Akin will have developed roughly 72,000-square feet in commercial projects.

According to Akin’s CEO Ariel Lawrence, the opportunity to participate in this project aligns with the company’s mission to “disrupt” the industry and “to do good projects, in meaningful places, for people, and with people who look like us.”

“We hope to do so with pride and do work that we can be extremely proud of, knowing that we’ve made an impact, knowing that this reflects us in our truest self and will impact generations to come.”

However, even with a rockstar team on deck, the group’s ability to close on the property remained an open question.  For starters, the building was owned by an arms dealer who previously sold guns and other ‘safety gear’ to law enforcement personnel from his properties in Leimert Park.  While their time as tenants did provide some competitive advantage during the negotiation process, there was never any guarantee that the prospective buyers could pry the property loose from the notoriously difficult seller.

Ultimately, the group agreed to a $6.5 million purchase price that was $2 million more than the property is currently valued – a significant price to pay for self-determination.

Aside from some challenging negotiations, the merchants still needed to raise the necessary capital, a difficult task considering the inflated valuation.

After receiving an initial $2.5 million grant from Wells Fargo and another $1.5 million in commitments from a LA-based CDFI and other non-profit donors, the group received a major boost from County Supervisor Holly Mitchell.

Thanks to public support and concern over displacement, the Los Angeles County Board of Supervisors approved a motion to establish a countywide anti-displacement program for small businesses.

The program comes at a particularly poignant time, with the entire community caught off guard by a market rate development project that seemed to ‘pop-up’ overnight.

“We’re in danger of losing the heart and soul of our city,” insisted Dr. Dove when asked about the $4,000 per month apartment units being built around the corner along West 43rd Street.

The motion drafted by Mitchell allocates $12 million in funding to Black and other POC owned businesses, to purchase the retail property they are leasing to operate their businesses.

“When Holly Mitchell got involved, it changed the dynamics, from there, things actually looked promising,” Jolly said.  “If she wasn’t involved to fight for us, this would have never happened.  Leimert Park has a special place in her heart.”

Utilizing the funding from the new program, the group was able to bridge the gap and ultimately finalize the deal.

Eye Towards The Future

Although no official plans have been set in motion, moving forward, the group does intend to eventually redevelop the property built in 1948.  For now, a series of repairs are slated to begin in the coming months.

While the overall vision for the property includes affordable retail space for Black merchants as well as housing, West is adamant that any future redevelopment will include input from the community.

“Redevelopment does not mean gentrification,” said West, who also serves as president of the Black Owned and Operated Community Land Trust – the umbrella organization that serves as the owner of record for the Degnan purchase.

To ensure that long-time residents benefit from whatever is eventually built on the property, West emphasized that economic development would remain central to the buildings mission.

“Affordable housing is a great way but isn’t the only way to rejuvenate or regenerate a community,” said West.  “Black Owned and Operated Community Land Trust will focus on addressing the deprivation through quality of education, access to clean food and services, and most importantly health and care issues as we expand this project.”