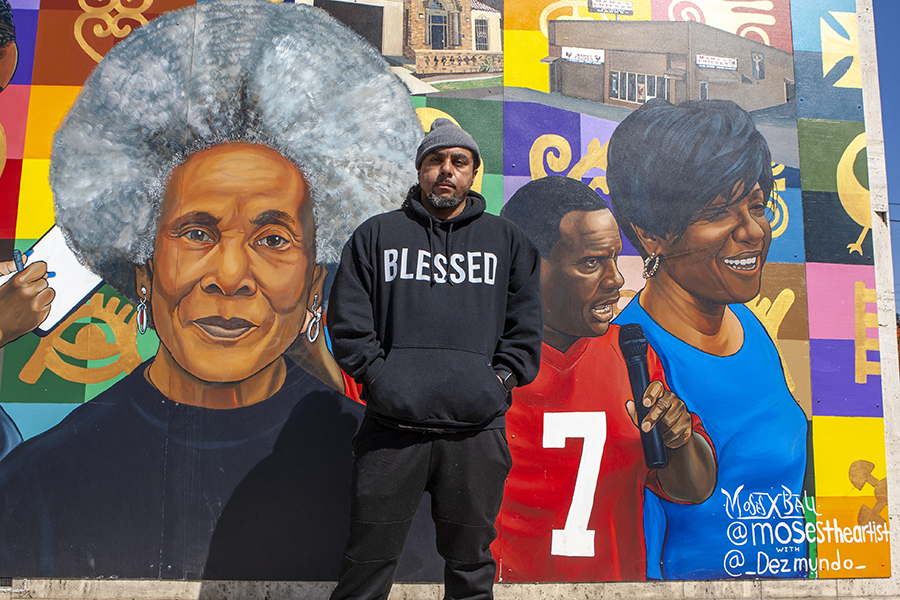 The local artist showcases Black communities in a positive light through his murals.

Moses Ball’s artwork is heavily visible, as thousands of people on a daily basis drive by his mural “The Heart of Hyde Park” on the northeast corner of Crenshaw Boulevard and Slauson Avenue.  He was the lead artist on the project, which was commissioned by L.A. Commons, an organization based in Leimert Park that engages communities in artistic and cultural expressions that tell their unique stories.

Murals can tell the story of a community by projecting political and social statements, and by showcasing the people within the neighborhood.

“Mural making has always been kind of like our political voice in our community,” Ball said.  “It’s a way that we can speak upon issues when the media wouldn’t cover it.  We could express things that are important to our community.  If we lost somebody that we loved, we could pay tribute to them on a wall.”

Murals can be more effective than other forms of art because it is more visible than typical pieces of art.

“A painting that’s in a gallery or that would be in a home, you have a very limited audience of people who are going to see that,” Ball said.

Ball has multiple murals in Black communities of Los Angeles, and his Hyde Park mural spoke to an issue that is affecting neighborhoods in major cities around the nation.

“It was birthed out of a desire to speak up about possible gentrification that could happen in our community with the new train line,” he said.

Before creating the mural, Ball met with the Park Mesa Heights Community Council to discuss the themes of the artwork and to ensure that the mural properly represented the Hyde Park area.

“We were on the same wavelength as far as our beliefs about the community, and keeping those who are living here empowered to stay,” Ball said.  “And hopefully passing homes on and businesses on from generation to generation.  This ended up being a tribute to business owners, community activists, artists, and educators in our community.  It’s really a love letter to Hyde Park.”

While many images from Black communities of South Los Angeles highlight the negative aspects of the area, this mural promotes positive narratives that are typically not highlighted.

“It’s a real vision of what the community is,” Ball said.

“This community is home.  If this is home to you, you see everything through rose colored glasses sometimes.  But it’s also accurate. We have real people here who are fighting for housing rights, who try to get good and healthy food in the community, and who are just trying to make a positive impact.  There’s no place that I’d rather be than right here on Crenshaw.”

The most prominent figure on the mural is late rapper Nipsey Hussle, who was killed in front of his store a block west of the mural.  Ball felt that it was important to highlight Nipsey Hussle because of his positive impact on the community, and Ball also wanted to showcase community members who are not as well known. 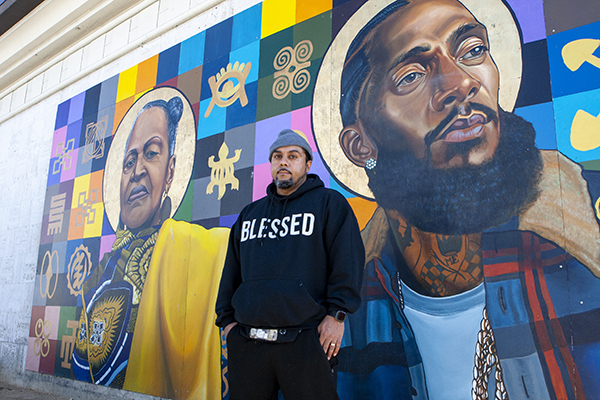 “The thing that I love about this mural is that even non-famous folks or less known folks who had major impact on the community are highlighted in the same light that he (Nipsey Hussle) was,” Ball said.

Ball is making a powerful impact on local communities with his skills, and he knew that he had artistic abilities at a very young age.  Some of his earliest memories as a young child were creating images.

“I was sitting around the coffee table with my brothers and sisters, and everybody was just scribbling,” he said.  “But it wasn’t natural for me to scribble.  I felt like I should be making an image.  From that point I knew that making images was something that I really wanted to do.

“I think that it was something that God put in me, and as I got older, I felt that if you have a gift and talent, you should develop it.”

Ball attended Los Angeles County High School for the Arts on the campus of California State University, Los Angeles.  He was a part of the visual arts program, and he later attended the Art Institute of Chicago.

Ball has painted murals at the Leslie N. Shaw Park on Jefferson Boulevard just west of Arlington Avenue, at the EXPO Center in Exposition Park, and at the Challengers Boys & Grils Club on Vermont Boulevard and 50th Street.  For many of his projects, he teaches children how to paint as he’s creating the murals. 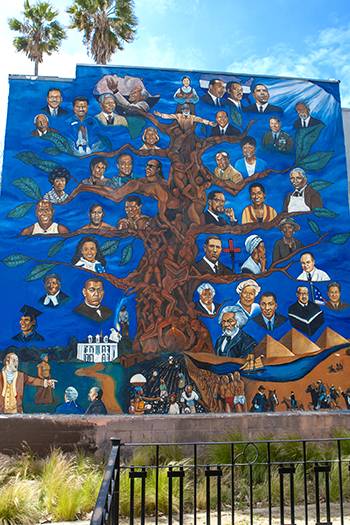 Keep up with Ball’s work by following him on Instagram @mosestheartist.