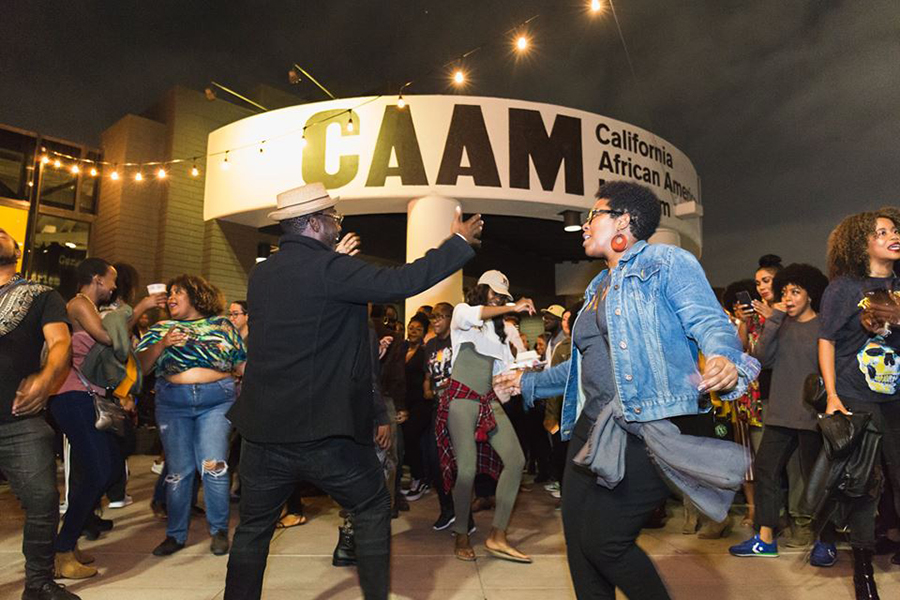 The popular Can’t Stop Won’t Stop event, which features a DJ and food trucks, is a celebration of Black culture, Black music, and Black art. Photo courtesy of CAAM

As the California African American Museum’s Fall 2019 season kicks off this month, the museum continues to use lively events with DJs and food trucks to attract younger people to the museum.

The California African American Museum (CAAM) unveils five new exhibits twice a year.  While many museums are mainly history or art, CAAM features both so that there is something interesting for everybody.  They also use events that feature discussions, live music, DJs, and even yoga to bring a diverse crowd to the museum.

“I use the analogy that we use the choir to hear the sermon,” said George Davis, CAAM’s executive director.  “Some people may feel a little intimidated to come to a gallery.  But they don’t feel intimidated by coming here and hearing music or seeing food trucks.  And then they go into the galleries and they’re like, ‘Wow.’  So they kind of go on this journey.  Our strategy is to get them in here, and then they absorb all of the content.”

Under Davis’ leadership, CAAM has attracted a younger demographic by having programs and events that appeal to a younger audience.

“People in their 20s and 30s, they didn’t know about the museum, and they didn’t have a reason to come here,” he said.  “There wasn’t a feeling that that generation had a cultural place that they could go to.  Museums were kind of like their parents’ place to go to.”

Davis has relied upon a relatively young staff to attract millennials.  The popular Can’t Stop Won’t Stop event is a celebration of Black culture, Black music, and Black art.  The event features a DJ and food trucks.  Younger people have taken up yoga, so CAAM has featured Dorian’s Live Neosoul & Yoga.

“For a person like me, I don’t have to understand it,” Davis said.  “I don’t know why we’re doing yoga in a museum; I don’t know why the mats are out there.  I don’t get it.  But there’s 400 people here.  And they’re young and excited.  That’s all that matters.  The community is excited about it.”

Davis was concerned how older people would accept the programs that are geared toward a younger audience.

“What’s happened to my pleasant surprise, that even though they may not get all of the exhibits, they’re thrilled that their children and grandchildren are coming,” he said.  “It’s kind of like at a church.  If everybody there was on walkers and were in their 80s, you’d be a little worried about the future of the church.  But if you saw a youth choir, and people bringing their kids, you’d feel that your church is going to be around when you’re gone.  That’s one challenge within the Black community.  We have older people who stick around (in management positions) too long.  We have to recruit younger people and new blood to come in.”

All of the exhibits at CAAM are based on California history and artists, which can be overlooked nationally.

“When people think about African American history, they think about slavery, Jim Crow, the South, the Harlem Renaissance, and maybe as far as Chicago,” Davis said.  “So the founders here wanted it to be California specific.  This history museum will always have a California hook.”

The Fall 2019 exhibits include “Cross Colours: Black Fashion in the 20th Century,” “L.A. Blacksmith,” “Making Mammy: A Caricature of Black Womanhood, 1840-1940,” and “Dust my Broom: Southern Vernacular from the Permanent Collection.”

CAAM is located at 600 State Drive in Exposition Park.  Admission is free, and parking is $12.  Operating hours are Tuesday - Saturday, 10 a.m. to 5 p.m., and Sunday, 11 a.m. to 5 p.m.  The museum is closed on Mondays.  For more information about the fall exhibits and upcoming events, visit www.caamuseum.org, and follow the museum on Facebook, Twitter, Instagram, and YouTube.