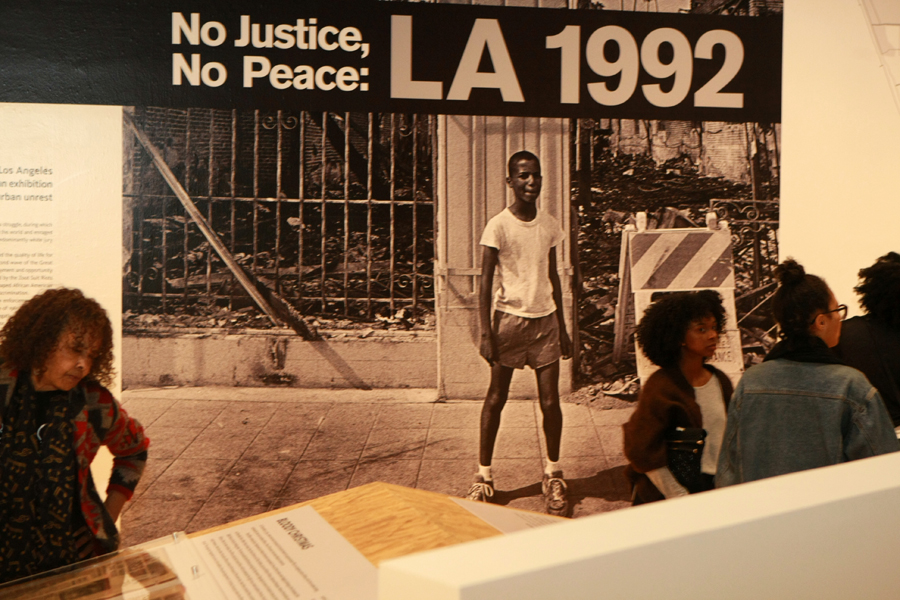 The exhibit examines how housing restrictions, police brutality, and other incidents led to the 1992 uprising.

Looking at the 1992 Los Angeles Riots in a vacuum, the uprising was in response to four Los Angeles Police Department (LAPD) officers being acquitted for the use of excessive force in the beating of Rodney King.

Tyree Boyd-Pates, History Curator and Program Manager at the California African American Museum (CAAM), took a much broader approach when he took on the task of curating this piece to highlight the 25th anniversary of the L.A. Riots.

Boyd-Pates used profound photographs and artifacts to show that the 1992 L.A. Riots was not solely about LAPD officers beating King, but the uprising was a symptom of a much larger problem.  The riots, which happened 26 years after the Watts Riots, was due to roughly 80 years of various forms of oppression that black people endured in this city.

The exhibit goes as far back as the Great Migration, starting in 1915, and occurring again in the 1940s.  Over six million black people fled the Southern states, where Jim Crow segregation devastated black families.  Black people moved to urban cities in the North, East, Midwest, and West.  While conditions were better than the South, especially in the more progressive Los Angeles, black migrants were still met with racism, poor working conditions, housing restrictions, and police brutality.

The exhibit highlights the housing restrictions in Los Angeles that forced black people to live along Central Avenue.  Redlining was a form of housing discrimination, and it prevented black communities from flourishing by restricting home loans, which led to the creation of housing projects that still exist today.  Housing discrimination also contributed to increasing levels of unemployment, poverty and crime.

The exhibit also highlights the contentious relationship between law enforcement and black communities throughout the 20th century, showcasing incidents where black people were either beaten or killed while being detained or arrested.  Those issues led to the Watts Riots as well as the L.A. Riots.

The L.A. Riots is the most prominent piece of the exhibit, but Boyd-Pates did a masterful job showcasing the history that led to it.  Many people are unaware of many of the aspects of this history.

“I got a review from a woman who came from the Midwest, who happened to be Caucasian,” Boyd-Pates said.  “She said that she now understands, contextually, why the L.A. uprising occurred.  For her, she said that she had witnessed the uprisings on her television set in 1992.  She didn’t understand why people of color in South Central Los Angeles would have done that to their own communities.  But now she contextually can see what caused some of those things.”