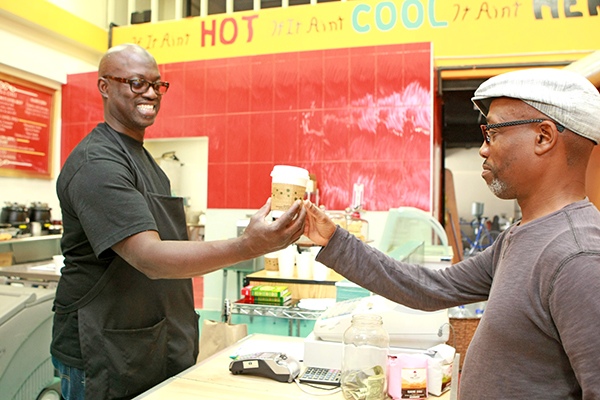 Hot and Cool Cafe recently opened on Degnan Boulevard in Leimert Park, and the community is very excited about this new establishment.  While there are other coffee shops in South Los Angeles, this one has special meaning because it is Black owned, and it is more inviting than the typical coffee shop.

“Coffee shops are now the meeting place,” said owner Anthony Jolly, who has worked in the coffee industry for over 20 years.  “If you want to meet a friend, if you want to meet someone for business, you go to the coffee shop.  In African-American communities, we don’t have very many of our own places to meet, network, be creative, and grow together.  Collaboration is important, and we lack that.  We don’t have very many facilities that allow that.  Hopefully this can be a component to increase it.  To be a hub where people meet each other, and talk about things that they’re doing.”

Recently, the Empowerment Congress West Area Neighborhood Development Council, which presides over Leimert Park and Baldwin Hills, held a community meeting at Hot and Cool Cafe to discuss a proposed housing development that will be built on Crenshaw Boulevard, just north of 43rd Street.

Jolly said that a meeting of that nature would not have taken place at the mainstream coffee houses because it would be too political.  But at Hot and Cool Cafe, discussions on topics that affect the community, good or bad, are welcomed.  It is important to bring the community together to collectively share thoughts and ideas.

“Since I’ve been in Leimert Park, I’ve met really successful and distinguished African Americans who have a lot knowledge and information that they can provide to the next generation,” Jolly said.  “That information, when shared with millennial groups of African Americans, we can use that to create industries, sort of a renaissance.  We need a place to meet in order to move forward in this country.”

Coffee shops typically attract professional people with a wide range of talents.  When it comes to Black people, those talents typically benefit companies and provide services that do not enhance their own communities.

“African Americans work so hard building other companies,” Jolly said.  “No one serves African Americans.  We’re always serving others.  This is the place that when you come in, we’ll serve you.  You can come in, and you will be treated well, and you can be served to the same standard that you bring to other communities, and other corporations.  We’re very under appreciated, and we should be appreciated.  This shop is here to thank the professional African American of enduring and building corporate America.”

This coffee shop also recycles Black dollars, as the money produced is staying in the community.

While a Black-owned coffee shop in South Los Angeles is symbolic and serves the community, the main product is the coffee, and Jolly is an expert.

“I know a lot about coffee; I don’t know what else to do,” Jolly laughed.  “All I know is coffee.  If you told me to go and get something from Home Depot, I’ll fail.  If it’s not coffee, I wouldn’t know what to do.  I know coffee from crop to cup.”

Jolly’s career in the coffee industry started as a Starbucks barista over 20 years ago.  He participated in barista competitions, and eventually moved from his hometown of Washington D.C. to Colorado when he wife started law school.  He learned the specialty coffee industry, which is well established in that region, while there.  Later he met a group that was developing and importing coffee from Ethiopia, which is known as the birth place of coffee.

Jolly took an internship that led him to moving to Ethiopia for a year.

“I worked with the farmers, on the ground, applying post harvest development techniques,” he said.

While there, Jolly decided to branch out on his own, and he worked exclusively with two local farmers, importing their coffee throughout the United States.  He also taught himself how to roast coffee.

At Hot and Cool Cafe, Jolly imports the raw coffee from farmers with whom he has good relationships with.  The coffee is roasted when it gets to the U.S., and once he has the proper permits and gas lines installed, he will be roasting the coffee in Leimert Park.

Hot and Cool Cafe’s signature drinks are the honey latte and cinnamon vanilla latte.  They also have an assortment of teas.

“Herbs are the new veggies,” Jolly said.  “So we want to bring a healing component to the beverages here.”

There are also pastries, ice cream and other desserts, as well as hot food such as stews, soups, and chili.

“Through research, we’ve found that you don’t see very many extravagant soups in coffee shops,” Jolly said.  “We want to be one of those that does it first.” 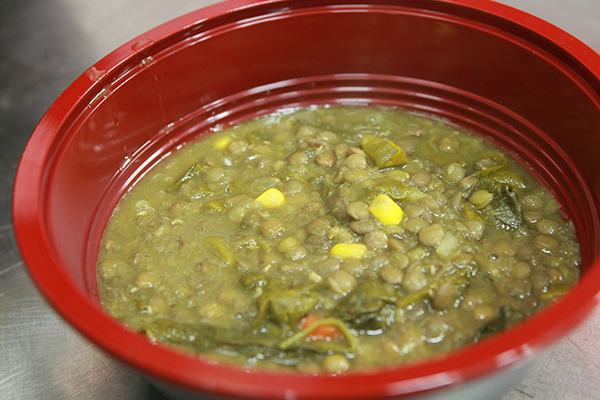 Hot and Cool Cafe is open seven days a week, from 7 a.m. to 10 p.m., and they have free WiFi.  They are located at 4331 Degnan Boulevard.  Follow them on Facebook and Instagram. 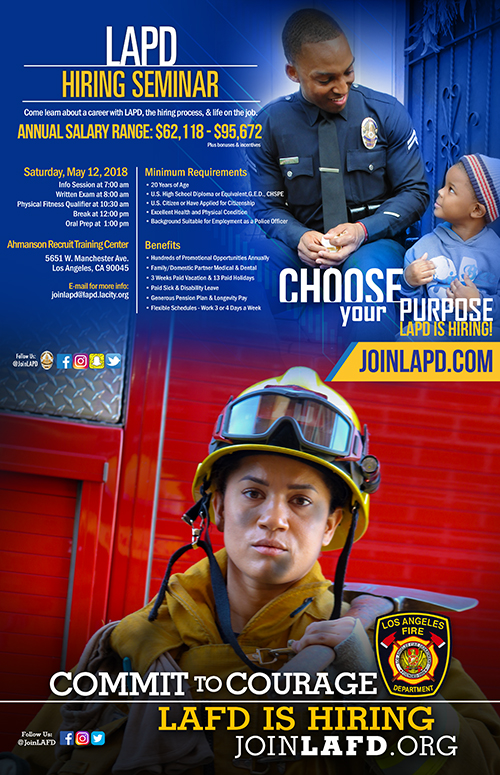