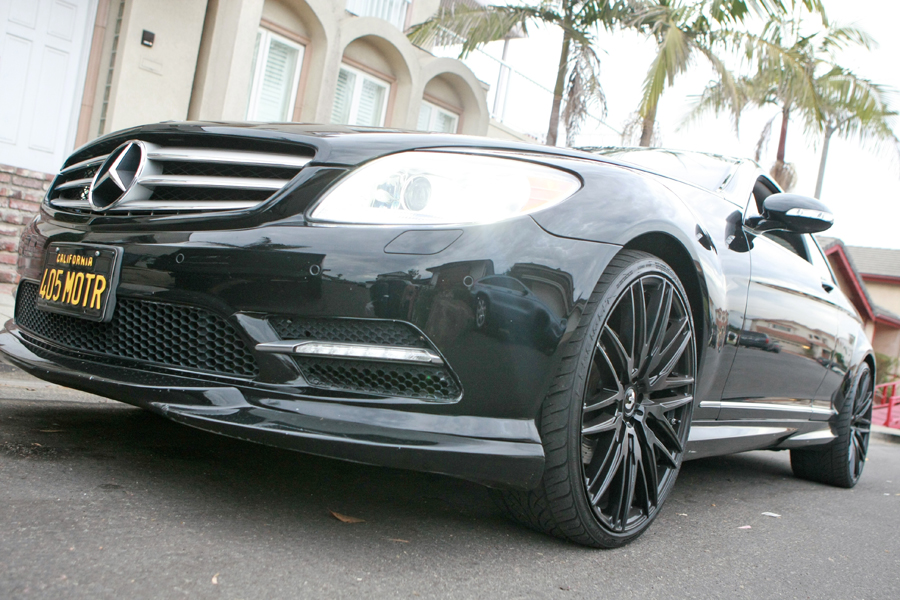 Stevo Ward made subtle changes to his Mercedes-Benz CL500. Those changes make his car standout from the crowd. Photos by Jason Lewis

Stevo Ward is the go-to-guy to make a car a head-turner.

Steven “Stevo” Ward has been customizing cars for decades, and his talents have been utilized by several NBA stars, many of which played for the Lakers and Clippers.  But at 405 Motorsports, his clientele goes well beyond high-profile athletes.

405 Motorsports specializes in custom upgrades.  When it comes to celebrity clients, Ward is dealing with exotic cars, such as Lamborghini and Ferraris.  But many of his clients are normal folks who are just looking to jazz their cars up a little bit.

“You can call it personalizing a car,” Ward said.  “Some people just want that little something different about their car to make them a little bit different when they’re cruising on the streets.  I deal with a lot of corporate guys.  They don’t want the loud rims or the loud music.  They just want to put a little seasoning on it.  So when you’re at a corporate meeting, and your car comes up in valet, people look at it like it’s a really nice car.  But they may not know why it’s so nice.  I could just change something really small and it will look really good.

“It’s like the difference from wearing a custom suit to an off the rack suit.”

Ward is a Baldwin Hills resident, and he grew up in Carson where he began working on cars, starting with a 1969 Volkswagen Beetle.

“My father gave me that car,” he said.  “Back in the day, your parents would give you a hand-me-down.  They’d give you an old car, or an old bucket, and you’d appreciate it more than getting a new car.  So basically I took that car and stripped it down, sanded it myself by hand, and eventually got a paint job on it.”

Ward also flared out the fenders, lowered the suspension, upgraded the sound system, and modified the engine and exhaust.  He drove his custom car, and others that he customized, to a number of the local hot spots.

“One of the spots to go to was The Wall on Crenshaw (adjacent to 50th Street),” he said.  “That’s where you got all the creative input on different paints, what was in style, what was the hottest wheel.  You basicly took that creative input and put your own creative style onto that.”

It wasn’t long before Ward was known as the go-to guy for car customization in his neighborhood.  He landed a job at West Coast Customs, where MTV’s Pimp My Ride was filmed.  Ward worked on the first season.

“We were famous and we were known, but we were all broke,” he said.  “We weren’t making any money, but everybody knew who we were.”

One of the shop’s clients believed in Ward’s ability.  NBA star Shaquille O’Neal was a fan of his work, and told Ward that he’d financially support him if he opened his own shop.  Soon after, Ward opened Da Shop near Staples Center.

“Eventually Shaquille brought in the whole Lakers team,” Ward said.  “Kobe Bryant, Gary Payton, Derek Fisher, Rick Fox.  The list goes on and on.  Then Shaquille gets traded to the Heat, but he still brought me clients, like Dwyane Wade.”

Da Shop closed and Ward moved to Culver City to open 405 Motorsports.  Shortly after the move, the Clippers started to build their training facility right across the street.

“A big tall guy comes over and says that he’s looking for Stevo,” Ward said.  “He said that he heard that I made the baddest cars in L.A.”

While many of the basketball players bring in sports cars, not all of Ward’s high-profile clients have him customize exotic cars.

Recently, 405 Motorsports has moved to Torrance, close to where the 405 and 110 freeways connect.  Ward has partnered with Luxe Coachcraft to move into a 5,000 square foot facility.  405 Motorsports has exotic rentals, and this year they will start a youth program called 405 Experience, which will teach children the craftsmanship and mechanics of customizing a vehicle.

405 Motorsports is located at 970 Knox Street, Suite D, Torrance.  Contact Ward at (323) 275-8420, This email address is being protected from spambots. You need JavaScript enabled to view it., and visit their website at www.405motorsportsinc.com