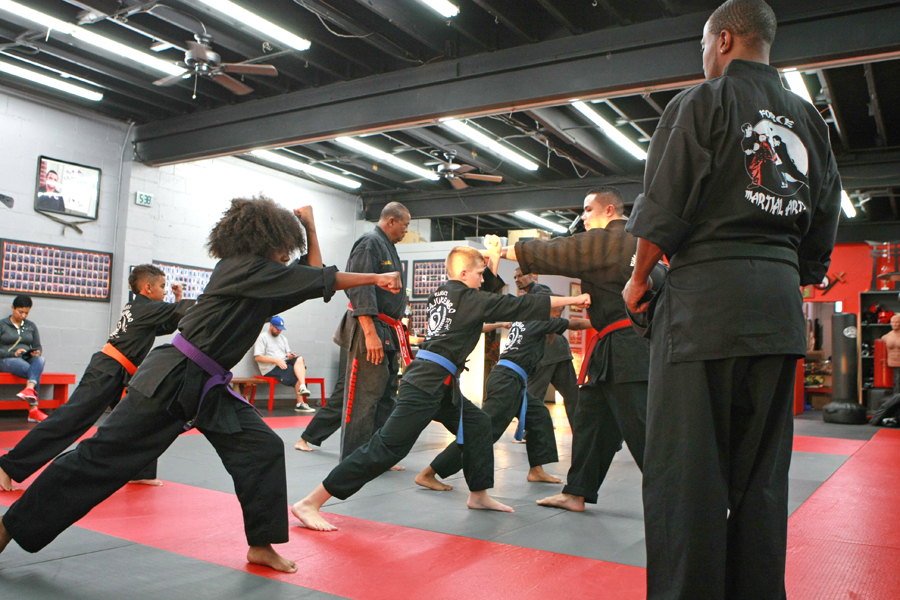 This form of martial arts teaches people how to defend themselves, and gets them into incredible shape. Photo by Jason Lewis

“Through this fist style one gains long life and happiness.”

Kingi’s Kajukenbo Self Defense Institute provides long life and happiness by increasing a person’s fitness level, body composition, overall health, and by teaching people how to get themselves out of potentially violent situations.

Kajukenbo is an American hybrid martial art that was created in Hawaii during the 1940s.  The name Kajukenbo comes from the various arts from which its style is derived.  ‘Ka’ for karate, ‘ju’ for judo and jujutsu (grappling, takedowns, wrist locks), ‘ken’ for kenpo (striking) and ‘bo’ for Western and Chinese boxing.

Kajukenbo is a self-defense system, and it has been called dirty fighting because it uses strikes to the eyes or groin, which can be very useful when taking on a larger attacker.

“This system is really no nonsense,” Kingi said.  “Kajukenbo was termed in the old days as the art of dirty street fighting.  It’s about target areas.  So for smaller women against a big guy who is attacking them, it’s all about target areas.  The eyes, or the groin, or the neck.  Sometimes it sounds kind of gruesome, but if it’s a life or death situation, would you rather stick your fingers in somebody’s eyeballs, or would you rather him beat you down?”

To improve fitness, every class begins with cardio and calisthenics.  The students do push-ups, sit-ups, and sprints.

“You can’t defend yourself if you can’t last more than two seconds in a fight,” Kingi said.

The instructors are also fitness trainers, and there are nutritionists on staff who help people with their eating habits.  Kingi has seen a number of people lose a lot of weight from the training.

“Everybody goes at their own pace, but I’ve seen some crazy transformations,” he said.  “I’ve seen some really great ones.  We have one lady who was overweight, and she just kept coming.  At first she couldn’t do a lot of things that everybody else could do.  But she kept showing up, she kept putting in effort, and we kept encouraging her.  She lost over 100 pounds.  She moved up the ranks and she was excelling at every level.  You could tell outside of the studio that she was feeling better about herself.”

Building confidence is one of the benefits of this program, which is one of a few reasons why this is great for children.

“Honestly I feel like this is one of the best things that you can do for your kids,” Kingi said.  “Just because of the mental discipline and the self confidence.  It’s not just kicking and punching.  We teach that, but behind that is, especially for the little ones, just being able to concentrate on one thing for a few minutes without losing focus.  That’s a huge thing.”

Along with building confidence, this training creates leaders.

“Things that seem minor, like bringing up a four-year-old kid to the front of the class to count jumping jacks for everybody,” Kingi said.  “Little things like that expose them to being a leader.”

Kingi also said that this training helps children focus more in school because they are taught discipline.  They are taught not to talk in class and how to complete tasks such as homework.

Kingi’s Kajukenbo Self Defense Institute has been serving the community for 35 years, when Kingi’s father opened the studio in 1981.  Kingi took over in 2010 and is continuing his father’s work.