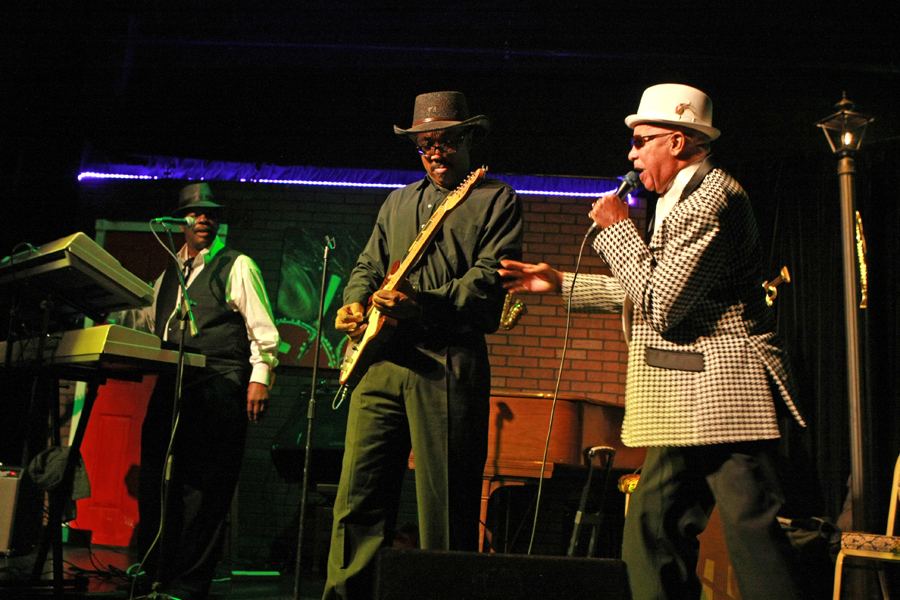 Stanley Griggs, also known as Sir Stan, showed up to sing the blues, but he shocked the crowd with his amazing rendition of Prince’s Purple Rain. Photo by Jason Lewis

The blues community is spread throughout the greater Los Angeles area, and every first Thursday of the month the top artists converge upon Leimert Park for a concert and jam session.

Michael Gliona created First Thursday Blues to pick up where the famed Babes and Ricky’s Inn left off.  Babes and Ricky’s Inn was one of the premiere blues venues in Los Angeles.  The Central Avenue establishment, which later moved to Leimert Park, featured the biggest blues stars in the world until its doors were closed in 2011.

Barbara Morrison started a yearly reunion event for the old blues venue.  The event was successful, so there was a plan to do a weekly event with a house band.  Gliona said that the shows were great, but the attendance was an issue.  So Morrison asked him to do a monthly show.  He took up the challenge, but he had an idea to really make the show pop.

“My idea was not to have a house band, but to feature, each month, one of the great blues bands of L.A.,” he said.

This monthly event showcases the rich and diverse blues community in Los Angeles.

Like the city, the blues community is spread out through Los Angeles.

The roots of the blues comes from the South and the Midwest.  Many regions have unique styles, but Los Angeles is different because the city is a melting pot of various cultures from around the nation.

“Here in Los Angeles, you can hear it all,” Gliona said.  “You can hear Chicago blues.  You can hear Southern blues.  That’s one of the wonderful things about Los Angeles; the cultural diversity.  It all comes together in a wonderful way here in L.A.  In Chicago, you’re mainly going to hear the kind of blues that they play in Chicago.”

While the styles that are performed in this city can vary, there is one constant at the First Thursday Blues showcase.

“Those of us who love the blues, knows that there is a core to it that may tend to get a little watered down when it’s used in other forms of music,” Gliona said.  “So on First Thursdays, we stick to straight ahead blues.  We feature all of the regional styles.  But it’s still the blues, and it still has that original core to it.”

This creates an environment that any music fan can appreciate.

“The atmosphere is kind of a combination of a concert, with a little more of the freewheeling atmosphere of a jam,” Gliona said.  “The idea of the concert to me, is that the blues is something worth coming to listen to.  To listen to an experience, just like any other fine music.  I want to really spotlight these musicians.  We have a great stage, a great sound system.  So when people come to the show, they are going to get a really good one-hour concert.  And afterwards, we can jam.  We can celebrate the blues.”

Doors open at 7:30 p.m., with the concert starting at 8 p.m. The jam session starts at 9:15 p.m.  Musicians from all over Los Angeles perform at the jam session, which can go on for over two hours.

The price of admission is only $10.  The Barbara Morrison Performing Arts Center is located at 4305 Degnan Blvd.  Contact them at (323) 350-1962.  Stay updated with Michael Gliona’s First Thursday Blues on Facebook.