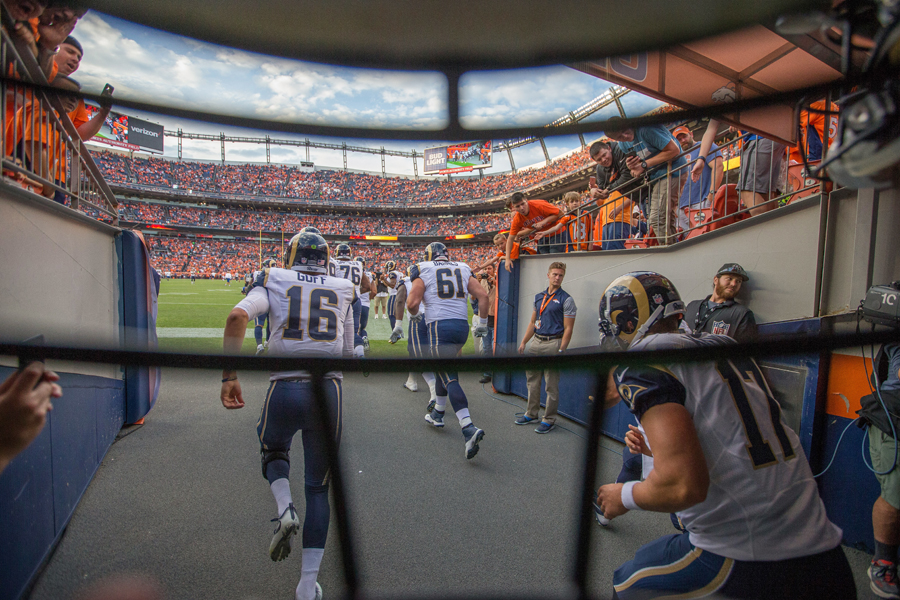 Lewis was the first photographer to mount a camera inside a face mask. Photo by Jeff Lewis

View Park resident is one of the Los Angeles Rams team photographers.

Lewis was a guest speaker at the Los Angeles Standard Newspaper Camera Club meting. This free camera club meets on the third Tuesday of every month, 7-9 p.m., at the L.A. Alpha House 3712 W. 54th Street.  RSVP at This email address is being protected from spambots. You need JavaScript enabled to view it..  Click the link for more information https://lastandardnewspaper.com/index.php?option=com_content&view=category&layout=blog&id=91&Itemid=266

Sports and photography have been a passion for Jeff Lewis since he was a child growing up in Lafayette Square.  He played Little League Baseball, winning a MVP award, at Rancho Cienga Sports Complex.  He played football at Fairfax High School, and lined up opposite Keyshawn Johnson on West L.A.’s football team.  He later went on to run track at UC Irvine.  Sports has been in his blood for years.

When he was progressing through his athletic career, he was also developing his photography skills, which has done him well since he moved away from playing sports, and starting shooting them.  After working for local newspapers, shooting high school sports led him to shooting major college and professional teams, such as the Lakers, Clippers, Dodgers, UCLA, USC, and other major sporting events in Los Angeles.

Lewis networked his way into a job with the Associated Press, which took him to new heights in his career.

“Every time somebody gave me a chance I made the best of it,” he said.  “I shot every event as if it was the last time I was going to be there.  If you keep on doing that you’ll be successful and you’ll achieve your goals.”

Lewis’ photos have appeared in major publications such as Sports Illustrated, ESPN the Magazine, and the Los Angeles Times.  He was named the 2006 Dodgers Photographer of the Year, and while working for the NFL Network, his photographs where shown on television during the game, which had never happened before with any photographer.  He shot Kobe Bryant’s 81-point game and Game 7 of the 2010 NBA Finals, when the Lakers defeated the Celtics.  The most memorable sporting event that the has shot was Super Bowl 50, which is the fourth Super Bowl that he has photographed.

“The Super Bowl is the biggest stage in sports, and I was front and center for the biggest game,” he said.

There had been rumors for a few years that the Rams might be returning to Los Angeles, and Lewis saw that as an opportunity to break into the NFL.

“I tracked them coming back to L.A. for several years before they made the move,” he said.  “Once they came, and they needed a team photographer, I put a plan in motion.

“I networked with a bunch of people that know people with the Rams.  People who would know what’s going on.  I did research and figured out who the P.R. director was, met him a couple times on the road.  I even met the mayor of Inglewood to figure out when the Rams were moving.  I used my connections with the Associated Press so that I could have the heads up on everything with the move.  I figured out who the old team photographer was and if he was going to make the move.”

After being placed on a short list of photographers who were given a tryout, Lewis was able to earn a spot on the team, and his first assignment brought back some fond memories.  The Rams training camp was at  his alma mater, UC Irvine, and his room was in the same dorm that he lived in while attending the university.

Being hired by the Rams put Lewis in an interesting position.  He grew up a San Francisco 49ers fan, and has made many road trips to shoot his favorite team, including when they played in the Super Bowl against the Baltimore Ravens.  But career comes first, so he has given up his favorite team.

“This is considerably different from being a fan,” he said.  “Instead of buying paraphernalia and spending money, and investing time as a fan, I’m getting paid for my time for being around.  I almost equate it to being back in high school, where you have a vested interest in the place that you go to school.  I have an interest in the Rams doing well because I’m a part of the team.  Being a fan of any other team gets trumped by something like that.  I’m very passionate about the sport, and I want to see us be successful.”

Many people have followed Lewis’ career on social media, and the reception to the news of being hired by the Rams has been great.

“Everybody is happy,” he said.  “Everybody seems to be a little more excited about it than I am.  But that’s because I’ve been in professional football for the last 12 to 15 years, where a lot of people who don’t really know my story and the history of what I’ve been shooting, they are very surprised and they’re very happy.  Where I see it as just the next step from a lot of hard work over the years.  So I’m very appreciative of everybody being extremely happy, but I also realize that I have a lot of work to do because I want to keep this position for a very long time.”

A position as a team photographer for a major sports organization is viewed as a career job, and Lewis is at the top of his profession.