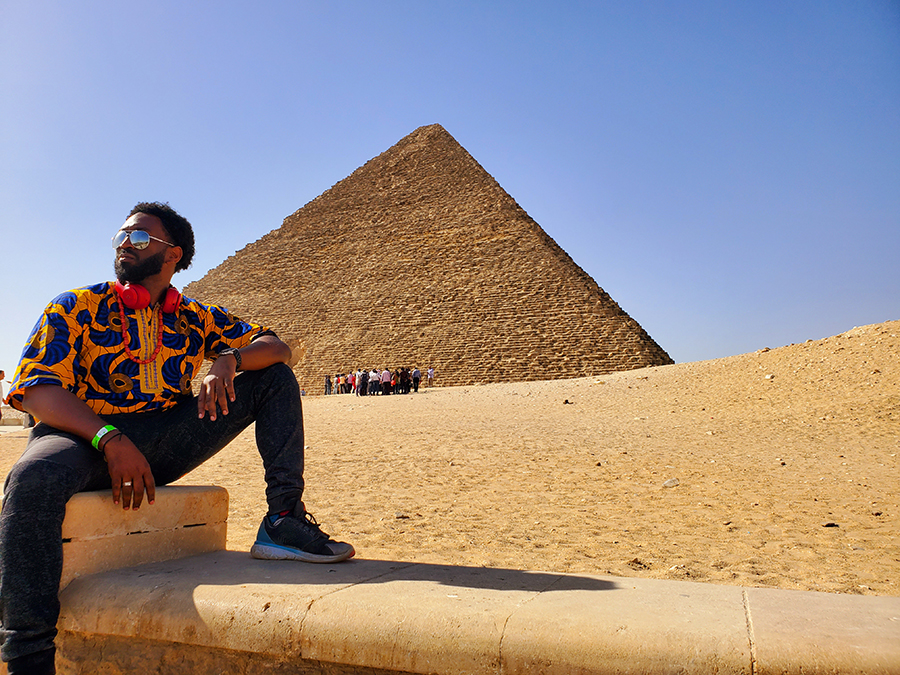 Brett C.S. Roberts traveled through the Sahara Desert in the middle of the night to reach Cairo, Egypt.

South Los Angeles native and Inglewood resident Brett C.S. Roberts published a book that gives tips on how to travel the world on a budget.

Many people sit at work daydreaming about traveling to far off places.  They scan through photos on social media of people marveling at the Pyramids of Gaza, enjoying the Afro-Latin cultures of Colombia, or swimming in the crystal clear waters along the exotic islands in Thailand.  A lot of people never get to their dream destinations, so Brett C.S. Roberts is helping people get there.

Roberts considers himself to be an unabashed wanderer, as he has visited 51 countries, and he is the founder of The Passport Blog (www.thepassportblog.com).  Through his blog, he’s been sharing his travel experiences and trip planning tips with his readers, and now he has released a travel book titled, “From the Cubicle to the World: The Definitive Travel Book for Busy Professionals Who Want to Explore the World.”

Roberts was inspired to create the blog and the book because people often ask him how he travels so much.

“I get that question so many times so I felt that I could put everything in a book and share a lot of the tips and hacks on how I travel, and how many working professionals who have full-time jobs can also do the same,” he said.

Roberts, who grew up in Leimert Park, now lives in Inglewood, and is a member of Kappa Alpha Psi Fraternity, Inc., works full time as a principal community relations officer with Los Angeles Metro.  While his job keeps him busy year round, he’s always searching for some free time to get away.  He utilizes most of the federal holidays for travel.

“A lot of my trips are short trips, and I kind of consider a lot of them like adult field trips,” he said.  “A lot of them are not week long or two-week long vacations.  My goal is to visit as many places that I possibly can and explore during that small period of time.  I want to do that while I’m simultaneously  fulfilling my responsibilities here at home.”

With short trips time is of the essence, so Roberts tries to hit the main tourist spots first and then goes off the beaten paths for more cultural experiences.

“When I went to Sydney, Australia, I had about three days,” he said.  “The first thing I did was to get on the double-decker tour bus and go around the city.  Time is so limited that I have to see as much as possible.  So I did that day one.  It was geographically feasible to see 10 places in one day.  On day two I went off the beaten path.  That’s walking through communities, talking to folks.”

Many times Roberts will see something of interest on the tour, and revisit that location the next day when he has more time to experience that tourist spot.  In his book, he discusses the ins and outs of navigating through foreign places.  He also discusses why it is important to travel and he gives tips on how to afford these trips.

“If you’re at work and you’re thinking, ‘Why should I take that vacation?’  I go over a lot of reasons about why one should travel, and how travel can make you a lot more productive once you get back home,” he said.  “I go over a lot of the how-to components of travel.  For example, utilizing your daily purchases to subsidize your travel.  Utilizing the points from credit card purchases.  You’re going to have to buy gas or lunch anyways.  So you might as well maximize those points and use those toward travel.  Knowing when to travel is also important.  Knowing that during certain seasons it’s cheaper to go to some places than others.  If you’re willing to go somewhere when it’s cold or when it’s hot, you might find a great deal.”

Roberts uses websites such as Skyscanner and Google Flights to find cheaper flights, and he gives tips on how to find deals on hotels, hostels, and Airbnb.

Some of Roberts favorite places to visit are places that have links to African-American culture.

“I’m fascinated with going to places where there are people who look like myself and who have similar cultures,” he said.  “It’s pretty cool when you have people who live thousands of miles apart, but they can have so many similarities, even if they do not speak the same language.  I can meet somebody in Trinidad and we listen to the same music and we understand each others culturally.”

Colombia is one of Roberts’ favorite places to visit.

“It’s an inexpensive place to visit,” he said.  “And I love Afro-Latin culture.  It’s a great opportunity to really engage with a lot of my brethren down there.  To understand a lot more of their culture.  The food is great.  It’s really a beautiful country.  You have the beaches in Cartagena and the mountains in Medellin.  You have the bustling cities of Bogota.  It’s a really fun place.  I also love Cuba for many of the same reasons.  You get a little bit of Caribbean flare with Cuba.”

One of the greatest travel experiences that Roberts has had was taking his first trip to Africa.

“The first time I actually set foot on the continent I was in college,” he said.  “I went to Morocco and I remember it clearly to this day.  I ferried across the Gibraltar Strait coming from Spain.  When I got there, I did kiss the ground.  For me, it was a homecoming.  Even though it wasn’t sub-Saharan Africa, but just to be on the ancestral continent where I know that I had relatives who were there several hundred years ago, for me it was a profound experience.”

Visiting Egypt was another incredible experience for Roberts.

“Going across the Sahara Desert in the middle of the night into Cairo, it was this dark trek across the desert,” he said.  “I mean pitch black.  It was a surreal experience.  I would recommend that one would fly in as opposed to going the route that I took, which was pretty adventurous.  But none the less, it was profound.”

“I love Houston,” he said.  “It’s a great city with a lot of fun things to do.  New Orleans is also great, and I love New York.  A lot of people aren’t checking for Salt Lake City, but it’s actually a beautiful city.  And they have a lot of landscape that’s really gorgeous, especially in the winter.”

Roberts wrote portions of his book while hanging around the beaches of San Luis Obispo, which is about 190 miles north of Los Angeles, and he enjoys visiting Santa Barbara and the Bay area.

“From the Cubicle to the World” can be found at Barnes and Noble and on www.Amazon.com.  The book is published in print and as an E-book.  Follow Roberts on Instagram, and Facebook