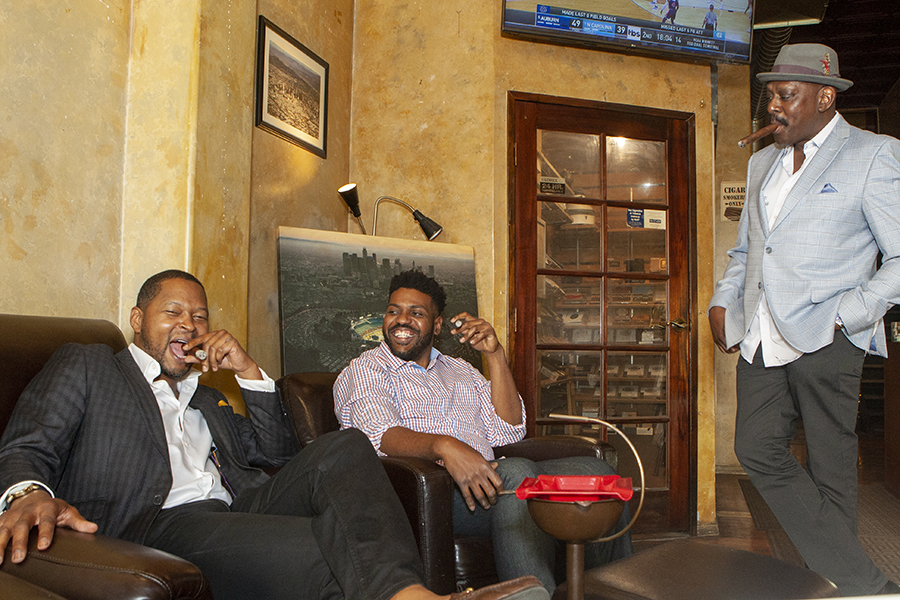 In recent years several Black-owned cigar lounges have opened, allowing people to stay within their own communities to enjoy one of their favorite pastimes.

African Americans are the second largest consumers of cigars, and Los Angeles and Inglewood provides a number of Black-owned cigar lounges for locals to partake in one of their favorite pastimes.

“There’s been a lot of action around L.A. with the opening of Black-owned cigar lounges over the past few years,” said Clifford Jones, operations manager at Smo’Kings Fine Cigars.  “Among the Black cigar community, there are a collection of folks who enjoy cigars and socializing together.  That greater community tends to float from lounge to lounge.  There’s a lot of friendships that are made, networking opportunities, and business opportunities that comes out of this smoking community.  I think that it’s a benefit that a lot of lounges opened up in proximity to one another.  It gives people choices, and each has a different flavor.  Some have a party vibe, some have more of a relaxed feel, and some are somewhere in between.”

The African-American cigar culture in the greater Los Angeles area is so rich that filmmaker Kareem Fort is producing a documentary on the local cigar scene.  He started off with a YouTube web series called “Beyond the Smoke,” and he filming a documentary called “Smoke Big,” which will feature 2nd Street Cigar Lounge in downtown, the Debonair Cigar Lounge in Mid City, Smo’Kings in Ladera Heights, Drobes in Inglewood, and L.A. Lounge in Inglewood.

Cigar smokers like the aroma of a good stick, and this activity is very relaxing.  The social nature of smoking cigars keeps the culture going.

Many cigar smokers stop by the local lounges to watch a sporting game, or just to hang out with other people who enjoy a good smoke.

Pickens owns the lounge in downtown along with Larry Pickens and Gregory Hayes.  The business partners have been a part of of Los Angeles’ cigar scene for years, and they like that Black cigar smokers have welcoming lounges to go to.

“We got started in 2014, and since then we’ve seen other (Black owned) lounges expand across the city, which is good,” Pickens said.  “We’ve (Black people) never had a spot to call our own.  We’ve always had to go to other people’s spots.  We’ve created our own haven in different areas of the city.”

For cigar smokers, these lounges become a home away from home.

“We create a family environment,” Hayes said.  “When people come here, it’s like “Cheers,” where everybody knows your name.”

While many people enjoy going to bars and clubs, cigar lounges offer something a little more laid back.

“At a bar, people drink, they get a little loud, and they can get a little rowdy,” Williams said.  “But at a cigar lounge, you sit, you talk, you smoke a cigar, you enjoy a game on TV, and you have a great conversation with other people.  It’s beyond the cigars.  It’s about the people.”

2nd Street Cigar Lounge is in a prime location because of the nightlife in downtown.  Many people stop by this lounge either before or after a night out on the town.  They also host special events throughout the year.

“People like the ambiance of Drobes,” Wade said.  “They feel relaxed, like it’s their home.  And they appreciate that. They vibe in here.  They love the music and they feel like they can sit down and have a great conversation.”

Drobes offers more than cigars and a cool place to hangout.  They have a “burn and learn” event series that features a book club, health and wellness workshops, financial literacy workshops, poker nights, and a golf club.  They also feature live jazz.

“We went into this with the concept of ‘intellectual entertainment,’” Taylor said.  “This has really resonated with the people in the community.  People were thirsty to go outside of the traditional bar setting.  Often people (in those establishments) can be too young and void of quality conversations.  So we decided to create an environment where professionals can engage one another in an enjoyable and relaxed environment.”

“We wanted to promote interaction amongst our people,” Stewart said.  “And networking and building relationships.  There’s conversations that are very key that go along with enjoying cigars.”

Drobes Stogies is unique in that they also sell custom clothing.

“We’re a cigar lounge that sells custom suits, shirts, ties, pocket squares, and all of the accessories that come along with it,” Taylor said.  “The pairing of suits and cigars is a unique venture.”

The name of the Debonair Cigar Lounge lets customers know what they should expect from this Mid City cigar lounge which is owned by Derek Harris and Antonio Martin.

“We have a mature classic style,”  Martin said.  “When we thought about a name for the cigar lounge, the Debonair fit perfectly.  When you come into the Debonair Cigar Lounge, you’ll come into a classic and upscale style lounge.  You’ll experience the debonair lifestyle.  That’s an emphasis on cigars, fashion, respect, gentlemen, all in one place.”

“When people come in, they sit down on nice, comfortable leather chairs, and reclining chairs that make them feel like they’re smoking at their house,” Harris said.

The Debonair Cigar Lounge has TVs for the sports games and they feature live jazz music every 2nd Friday of the month. 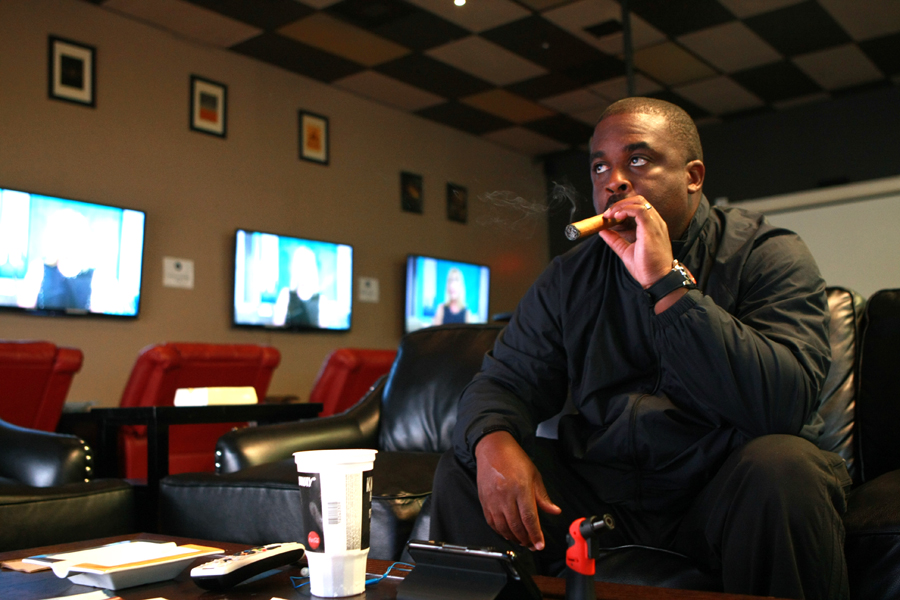 Windsor Hills resident John Coleman stops by SmoKing's get get some work done during the day.  Photo by Jason lewis

Smo King’s Fine Cigars in the Ladera Center is like the man cave that every guy wishes he had.  Big screen televisions line the walls with leather couches and sofa seats positioned just right so each person can watch the game of their choice.

“We talk about sports, politics, marriage, kids, life, everything,” Coleman said.  “It’s actually one of the places that I like to come to because there are a lot of older successful men here who have raised their kids and have moved on into retirement.  They give a lot of sound advice about moving into the next stage of your life.”

LA Lounge co-owner Larry Solomon used to have to travel miles outside of his community to sit in a cigar lounge, so he created a spot for him, his friends, and cigar smokers in his community.

“Most of the cigar lounges that we’ve been going to prior to Black people opening their own, we had to go to places up on Melrose, or Downy or Carson,” he said.  “They were okay, but they weren’t us.  We’re not racist or anything, but it just wasn’t us.  We wanted something different.  We wanted a place so that people didn’t have to go out of their neighborhood to smoke their cigars.”

“This place isn’t just for men; we get a lot of women who come in,” Solomon said.  “They smoke and they conversate.  This is a place for grown people to come and chill.  We get everybody in here.  Business owners, working people, actors, comedians, politicians, athletes.  We get all ethnicities.  Everybody comes here and everybody is welcome.  Even though we’re Black owned, my philosophy is that everybody is green.”

Cuban Leaf Cigar Lounge may be the best kept secret in Los Angeles and Inglewood’s cigar scene, and that’s by design.  The windows are pitch black so that people walking by cannot see inside.  There is a doorbell at the front door and a sign that says, “Reservations required.”

“A lot of celebrities and pro ball players come here to relax and not worry about people just walking in,” said owner Pahvae, who is from Inglewood.

Once a customer walks in, they are met with a classy lounge with high-end leather couches.  This lounge does not have a sports bar feel like other lounges.

“We’re built for the ladies, so our decor is softer and a lot more romantic for them,” Pahvae said.  “They need a place to come and feel comfortable.”

Pahvae keeps this lounge and the cigars exclusive for his clients.

“We rotate our sticks out every week, so when you come here it’s going to be a different experience,” he said.  “Most of my sticks are limited, award winning cigars.  So you’re not going to find some of these cigars at the other spots.”

Sisters of the Leaf https://www.facebook.com/SOTLSoCal/

The Sisters of the Leaf isn’t a cigar lounge, but a group of women who get together to enjoy cigars together.  The group’s founder, Myesha Michelle, was typically one of the few women smoking with the men at various cigar lounges throughout the city.

“I had no idea how many women smoked cigars,” she said in an interview with the Youtube web series “Beyond the Smoke.”  “As social media built in popularity, I found many women who were smoking cigars.  So I figured that there was some way that we could get together and smoke together as a community.

“My idea of this community is to allow women to smoke a cigar without felling that it’s just a boys club.  Because that’s initially what people think.  The idea is to let women know that this is something that you can do too.”

Michelle has some simple advice for women who would like to try out cigars.

“It is intimidating to walk into a cigar lounge, which generally may have mostly men,” she said.  “I’d say ask questions.  The person who runs the cigar lounge has a love for cigars, and would be delighted to show a woman around.  Be curious, and be open to trying it out.”

The Sisters of the Leaf host events at the Black-owned cigar lounges.