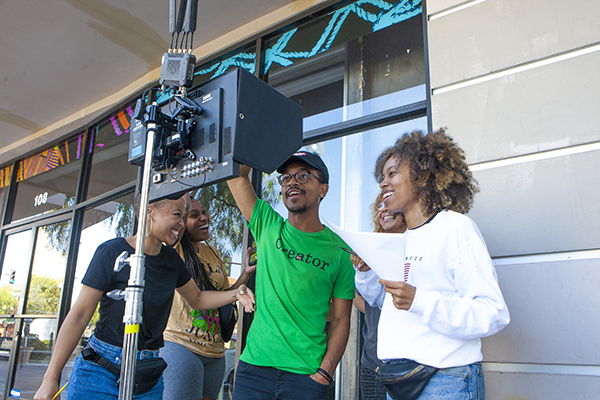 The dark comedy web series is co-created by Neima Patterson, a native of Ladera Heights and Inglewood.

Mental health is a growing topic around the nation, but in Black communities, to some degree it’s still a taboo subject.  There are several community groups that are erasing the stigma, and bringing awareness to an issue that torments a lot of people.

Filmmaker Neima Patterson, a native of South Los Angeles and Inglewood, is using her talents to bring awareness to this issue.  Along with co-creater Joel Boyd, she has created an online web series titled, “Sad Ass Black Folk,” which will air on YouTube.

“When we got into this, we realized that it was bigger than just a web series because these conversations aren’t being had, especially amongst young folks,” Patterson said.

Before creating the content for this web series, Patterson and Boyd, who are both Jackie Robinson Foundation scholarship recipients, consulted with mental health specialists.

“This web series is a platform to share that information,” Patterson said.  “It’s time for us to open ourselves up and talk about it.  Because that crazy uncle could also be going through something that needs attention, but he’s not supported from his family or receiving the proper diagnosis, and he doesn’t know where to go.”

One of the points of this series is to create a dialogue around mental health.

“I think through conversation, people will feel more open to talk about their experiences,” Patterson said.  “I personally have a lot of friends who were scared of therapy, and I finally opened up and said that I went (while in college), so they decided to go and they have been able to sort through some things.”

Many people in Black communities do not realize that there is plenty of help in their own neighborhoods.

“The more we talk about it, the more we realize that there is access (to mental health treatment),” Patterson said.  “Many of us can go and do go, but we just don’t talk about it.  So it doesn’t feel normal.  The hope is that with this web series, people will think that it’s a safe thing to talk about, and not feel ashamed of it.  Or feel like you’re crazy, because we all have things to deal with.”

This web series is a dark comedy that uses humor to make people comfortable enough to learn about a difficult issue.

“There are some episodes where there are only one or two hard jokes, and a serious tone, but it’s still funny,” Patterson said.  “Or a show that has light overtones but dark undertones where we’re talking about serious issues.  There are certain scenes that we wrote that have no jokes at all because we chose a topic that was so serious that we didn’t want to take away from the heaviness of it.”

The series is filmed in South Los Angeles and Inglewood, where Patterson is from.  Growing up she attended private schools outside of the communities which she was raised, and she graduated from UCLA in Westwood.  While she has spent a lot of time outside of her communities, she greatly appreciates the Black neighborhoods where she grew up and in which she still lives.

“It’s always nice to come home, because it never feels like real life when I’m anywhere that’s not South L.A. or Inglewood,” she said.  “I enjoy being home and around my people.  It feels more like what life is about when I’m back home.”

Patterson has been involved in performing arts since her childhood, as she studied acting and dance at the Amazing Grace Conservatory in Mid City and Lula Washington Dance Theatre in the Crenshaw district.  While at UCLA, she majored in World Arts and Culture with a concentration in dance.  She combined her passion with one of her mother’s passions, which led her to film.

“I always loved writing and my mother loved movies, so I adopted a love for movies,” she said.  “I thought that I could direct and choreograph music videos, which is not lucrative at all anymore because there’s no budgets for music videos.  So that forced me to start thinking about directing as well as choreographing.  Then I realized that people write films.  Maybe it’s the writing that I actually enjoy.”

Patterson furthered her education at USC’s School of Cinematic Arts.  She co-created Peachyland, which is an event series designed to give young entrepreneurs and professionals the tools to succeed.  The series is documented on YouTube.  “Sad Ass Black Folk” is the next step in her career.

“It’s about creating a calling card,” she said.  “When you say that you’re a writer, people ask what have you done.  So we’re making this web series, and the next time somebody asks us that, we have something and it’s really good.  And there’s also turning it into a TV show.  If we get enough traction and people want to pick it up, it can be on a television screen instead of a computer screen.  That’s the next step.”

Patterson and Boyd recently raised $25,000 to fund this project, and people can continue to support their efforts.  Keep up with news about this web series on Instagram.