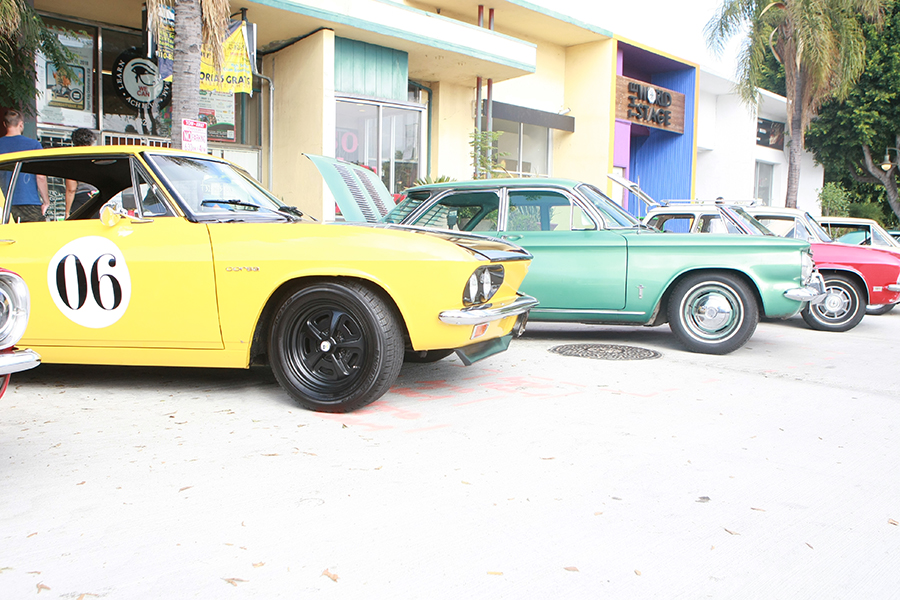 Leimert Park resident and local business owner Lawrence Ross loves classic cars, and he sees great value in supporting Black businesses.  For him, it’s not enough to simply say that people should support local businesses, so he decided to put action behind it while sharing his love for cars with his neighbors.

“I have a 1966 Corvair Corsa that I re-did, and I got tired of going out to Malibu (for car shows),” he said.  “It’s beautiful out in Malibu, but I was thinking, ‘Why don’t we have a cars and coffee of some sort around where we actually live?’”

Ross needed a spot for local classic car owners to meet, and he figured that he could support Black-owned Hot & Cool Cafe on Degnan Boulevard in Leimert Park Village at the same time.

“Tony Jolly (owner of Hot & Cool Cafe) has been a really great guy, and we figured that seven in the morning until 9 a.m., lets make it into a busy period where he’s selling coffee left and right,” Ross said.

Ross wasn’t really sure if this idea would work, but it didn’t cost anything to put the word out on Facebook, Instagram, and Nextdoor.  He also used this event to promote The Metaphor Club, which is the new writer’s lounge in Leimert Park that he co-owns with locals Lawrence Gilliam, Gerald Rawles, and Jimar Wilson.

When Ross showed up on Degnan Boulevard at 6:45 a.m., he was the only one on the block and he was worried that nobody was going to show up.  By about 7:30, there was about five classic cars and a newer Maserati parked in front of Hot & Cool Cafe.  A little after 8 a.m., classic cars lined nearly half of the block.

“It turned out way more than I actually expected,” Ross said.

The event was supposed to wrap up at 9 a.m., but classic cars kept pulling up over the next hour.  People were getting their coffee and then going outside to talk shop around the cars.

“The beautiful things about cars is that everybody talks about a couple different things,” Ross said.  “You talk about when you used to have a car, and a car that you really wanted.  With car culture, everybody can bond around it.  We love the art part of it.  You can’t beat a beautiful old car, and you really enjoy seeing what people’s passions are about.”

“It doesn’t have to be a shinny car,” Ross said.  “All of the cars are cool because they have a story.  If you have a car that’s a project, that you haven’t restored, it’s dirty and it has some rust, we like to talk about that.  We can give you all the unsolicited advice about what you should do, with your money, on that car.  And that’s why bonding around cars is always fun.”

While the cars were the main attraction, supporting small business was the main point of this meetup.

“I’m very demonstrative in supporting black businesses,” Ross said.  “Black businesses typically work on the margins in terms of being underfinanced and undercapitalized.  You can’t just simply say, ‘I support Black businesses’ without doing demonstrative things to make that happen.  So when we’re doing this, we’re saying, ‘I want to spend my money here, and I’m going to figure out a way to do it.’”

With the idea of supporting local Black-owned small businesses, MetaCars and Coffee was created.  The purpose is not only to bring people to Hot & Cool once, but to introduce this business to people who may have been unaware of its existence.  That can lead to repeat customers for the coffee shop.

“This will set it up to where people who never even knew that they were there, will buy coffee even without a car club,” Ross said.  “That helps them pay the lights, helps them pay for their operations, and that allows them to have a profit.  And for us in the community, particularly on a place like Degnan which has seen companies come and go, if you’re for small business this is crucial.  You can’t just think about supporting Black business, you have to do things that really do support them.”

This first MetaCars and Coffee was so successful that Ross has decided to make this a monthly event.  The next one will be held on Sunday, October 21, at 7 a.m. in front of Hot & Cool Cafe.  For more information about this event, visit www.TheMetaphorClub.com, and follow The Metaphor Club on Facebook, Instagram, and Twitter.  Hot & Cool Cafe is located at 4331 Degnan Boulevard.  Visit their website at www.hotandcoolcafe.com and follow them on Facebook and Instagram.