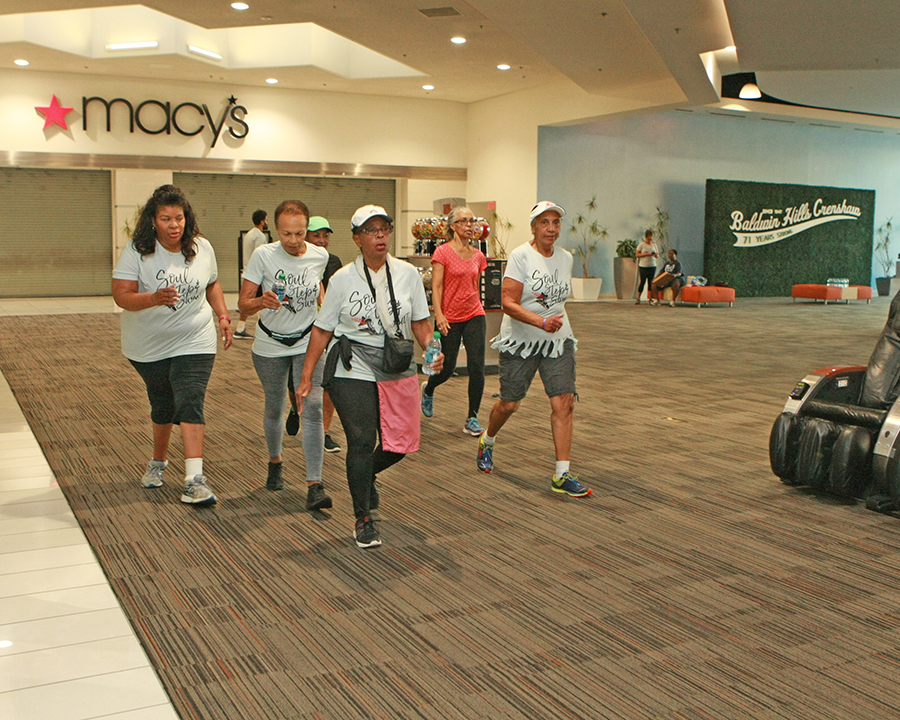 The walkers start on the Macy’s bridge, walk all the way down to Sears, and then head back. Photos by Jason Lewis

The group walks around the second level of the mall early in the morning.

Walking is one of the best forms of exercise that people can do, especially as people start to get a little older.  Many people walk around their neighborhoods, but walking on surface streets can present problems.  Walking up and down hills, uneven pavements, stray dogs, and weather conditions can be an issue.  The Baldwin Hills Crenshaw Plaza has a solution.

Unbeknown to many community members, the mall is open at 6 a.m. every morning, and AARP California takes advantage of this to encourage people to be more active.

“Many people in the community did not know that the mall was open at six o’clock in the morning, and that it was available to them,” said Jennifer Hopson, who coordinates the event for AARP.  “We wanted to make sure that the community knew that it was accessible to them.  They are able to walk inside, with air conditioning, not having to worry about broken pavements or loose dogs.”

AARP created the Soul Steppers walking program three years ago.  Every second Tuesday of the month, the walking group meets at the mall.  The group is mainly made up of senior citizens, and some of them bring their grandchildren with them.

The group meets on the Macy’s Bridge, where they perform a warm up with coach Erich Nall.  Then they walk laps around the second level of the mall.

Hopson has seen fitness improvements from people who routinely attend this walking session.

“When we first started, folks were having difficulties making one loop around the second level of the mall,” she said.  “Now we’re doing timed loops, and many people are doing four to five at a time.  We do a different t-shirt every year.  I’ve noticed that some people are needing a significantly smaller t-shirt every year.”

While the group meets only once a month, Hopson said that it has inspired a number of the group members to walk at the mall on their own multiple times a week.

Starting a fitness program can be intimidating, but with a group like the Soul Steppers, people can have support while they are looking to be more physically active.

“A lot of people are afraid of beginning a fitness journey because of a previous injury, or not feeling good,” Hopson said.  “So being in this really comfortable environment, people are walking much better, they’re more vibrant , there’s a competitive nature to the walk because they are timed and people want to get a good score.  Overall, anecdotally, fitness levels have improved significantly.”

From warm up to cool down, the workout takes about an hour and fifteen minutes.  The start time may be early, but Hopson said that the group members want to keep it at that time.

“If people have to go to work, or do something in the morning, they would still be able to workout before they start their day,” she said.  “We once tried to change it and make it later in the day, but they (walkers) said no, they wanted to keep it early in the morning.”

The Soul Steppers fits into AARP’s Eight Domains of Livability to create livable communities for the benefit of older adults.  One of the domains is using outdoor spaces and buildings to gather.

“The city and the county of Los Angeles have joined on to become an age-friendly city,” Hopson said.