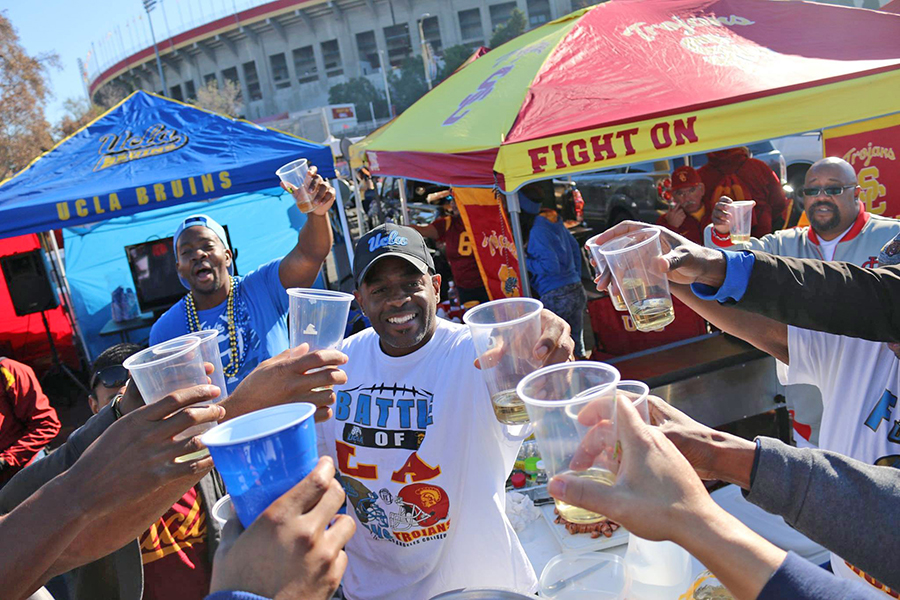 Black UCLA and USC alumni make a toast at the Coliseum before the rivalry football game. This year’s game will be at the Rose Bowl on November 19. Photos by Darryn Harris

Black alumni from the rival schools get together on a yearly basis for a joint tailgate.

UCLA and USC have been battling it out on the football field since 1929 in what is one of college football’s greatest rivalries.  While the rivalry can be heated, it does bring together alumni from both schools for some good spirited fun and fellowship.  That is true for Black alumni of both schools, as there is a yearly joint tailgate that is hosted by Black graduates of both schools.

This type of gathering by Black students and alumni for this rivalry game has been going on in some form for over 70 years.  Members of Alpha Phi Alpha Fraternity, Inc. from both schools held a joint tailgate in 1940s.  At the time the only Alpha Phi Alpha chapter in the city was Alpha Delta Chapter at USC, so students from surrounding colleges, including UCLA, joined the fraternity through USC’s chapter.  Legend has it that in 1946 there was an argument during UCLA’s 16-13 victory, and that led the UCLA Alphas to decide to leave the USC chapter and create Gamma Xi Chapter at UCLA in 1947.

The two Alpha chapters are still getting together for the game.  After a hiatus of the tailgate, the two chapters partnered with Alpha Kappa Alpha Sorority chapters at the respective schools in 2010, and they’ve been hosting the tailgate on a yearly basis.  This tailgate is not limited to those organizations, as Black alumni from other Divine 9 organizations, and UCLA and USC Black alumni associations have participated in what has become like a Black professional social event.

“The goal was to bring more Black alumni from the respective schools to come together and have a tailgate that has a homecoming spirit and vibe,” said Nashaun Neal, an alumni of UCLA.  “The purpose of the tailgate is to bring people together to celebrate.”

“We have some good food, some drinks, we tell some old stories and some new stories,” said Eric Johnson, an alumni of USC.  “Some people go to the game and some people don’t leave the parking lot.”

This event is like a homecoming and class reunion that spans several decades.  And since many of the Black alumni of the two schools are still in the Los Angeles area, people from the rival schools have formed personal and professional relationships.

“A lot of people who went to UCLA also got a graduate degree from USC and vice versa,” Johnson said.  “Both schools are good academically.  We kid and bicker with each other but at the end of the day people most look forward to just reconnecting with people that they haven’t seen for a year.”

“There are a lot of people that I work with and engage with in professional settings,” Neal said about USC alumni.  “We see them all the time.  So it’s like a friend seeing another friend.  At the end of the day we’re still all African Americans, and we face the same problems in the workplace.  This is one of the good places to come together and see familiar faces come together despite us wearing different school colors.”

As a Black social event, this tailgate has attracted many people who did not attend either school.

“They’re Los Angelenos, and everybody enjoys watching UCLA or USC,” said Neal.  “So they just come out and support and fellowship.  Even people who are not even from Los Angeles have come out because they said that they had never seen this type of environment at UCLA or USC football games.  So when we come together it has a very family reunion feel.”

The tailgate is free to attend, and people are encouraged to make a donation or bring some food or beverages.

“I tell folks not to come empty-handed,” Johnson said.  “If you want to donate there will be somebody on hand to take the money.  If they want to bring side dish or a bottle, that’s always appreciated.  Just do like you would always do at a family reunion, or a picnic at the park.  Bring a bottle of something that you would drink.”

This year’s UCLA vs. USC football game will be held at the Rose Bowl on November 19.  The tailgate will be in Lot H, and they begin setup about four hours before the game starts.  People just need to look for the A Phi A flag.

“We’ll be the biggest group of affluent African Americans that you’ll find for miles around,” Johnson said.  “We shouldn’t be hard to find.  And we’ll be playing loud music from all generations.”